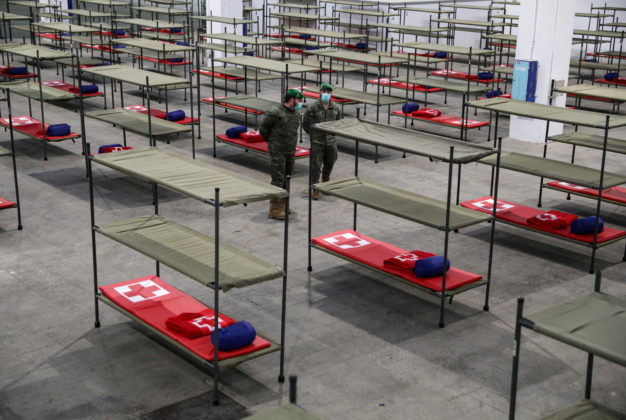 Members of the Logistics Brigade of the Spanish Army are pictured next to bunk beds for homeless people at a shelter in the Fira Pavilion, as the coronavirus disease (COVID-19) outbreak continues, in Barcelona, Spain March 25, 2020. REUTERS/Nacho Doce

LONDON (Thomson Reuters Foundation) – “Stay home” – that’s the message stretching from Italy to Iran as the world tries to contain coronavirus. But what if you’ve got no place to call home, or your house is out of bounds in the pandemic?

Some 1.8 billion people worldwide are homeless or live in inadequate housing, experts say, calling for urgent measures to ensure the most vulnerable get sanctuary in the outbreak.

Thousands more need a temporary place to live, either to stay close to crisis centres at the core of the coronavirus fightback or to keep housemates infection-free during weeks of lockdown.

Worldwide, the respiratory disease – which emerged last year in China – has infected more than 490,000 people and the death toll tops 22,000, according to Johns Hopkins University.

“Housing has become the front line defence against the coronavirus, said Leilani Farha, the U.N. Special Rapporteur on the right to adequate housing. “Home has rarely been more of a life or death situation.”

To that end, officials are scouring cities for vacant spaces or disused buildings to turn into makeshift homes.

From empty motels to festival halls, conference centres to cottages – buildings are being repurposed at breakneck speed, with the homeless a top priority.

“Housing, not handcuffs or forced congregate sheltering, for those experiencing homelessness, is the way to best ensure we all remain safer,” Eric Tars, of the U.S. National Law Center on Homelessness & Poverty, said in a statement.

In Italy, which has registered more than 7,500 deaths from the virus – it is the world’s worst hit country – some rail stations are doubling up as centres offering shelter and wash rooms.

Alessandro Radicchi, who runs the Binario 95 shelter in Rome’s central train station, said police were now routinely stopping homeless people, saying they could pay a fine for wandering the streets without proof of residence.

“You can imagine how a homeless person who feels alone during an ordinary time, now really feels there is no one,” Radicchi told the Thomson Reuters Foundation by phone.

The centre supports about 70 people daily but can only sleep 12, Radicchi said, adding that the Italian capital has more than 40,000 people living without adequate housing but only 1,000 beds in homeless shelters.

“We cannot host all of them. But we tell them, ‘when you go in the street, remember these things like keep the mask and don’t touch anything if you don’t have to’,” he explained.

Officials expect the crisis to have an outsized impact on the homeless, who often make do without sanitation or food, bed down in close quarters and suffer more underlying illnesses.

For the millions of poor and daily wage workers in India, the threat of hunger and a lack of shelter looms larger than that of the deadly coronavirus, which has prompted the government to lock down the country until mid-April.

Since the shutdown began on Wednesday night, homeless shelters have filled with migrant workers and labourers who have lost their livelihoods and so cannot afford food or a bed.

In the Canadian city of Montreal, a former hospital is this week being transformed into an isolation facility for homeless people exhibiting symptoms of coronavirus.

Patients will be kept in individual rooms in a building that sits at the top of a hill, tested for the virus and quarantined should they test positive, said a spokesman for the regional health agency, with capacity that can go up to 150 beds.

In London, the government will open a temporary hospital at the cavernous ExCel exhibition centre in east London, installing ventilators and beds in what was once an Olympic sporting venue.

U.S. communities have taken things into their own hands.

In California, a collective of homeless people and others whose housing is insecure have occupied six vacant, state-owned homes in the Los Angeles area.

“Letting hundreds of homes sit empty during a pandemic poses a health hazard to those like us — those who lack stable housing,” the Reclaiming Our Homes collective wrote on Facebook.

Cities are also scrambling to help hard-pressed healthcare staff – working flat out and often without transport networks – with well-placed home owners opening up their flats for free.

As the virus decimates tourism, hotels and holiday lets are also sitting empty, prompting rental company Airbnb to open pages in Italy and France to connect medics with hosts.

“Doctors and nurses were requested to move from one city to another to support hospitals with exploding intensive care units. It was our desire to support … these heroes,” said Airbnb’s general manager in Italy, Giacomo Trovato.

He said the firm would pay hosts a minimum rate of about 10 euros a night and cover cleaning and fees for up to two months.

More than 2,000 homeowners and 180 doctors and nurses signed up within days of the launch, he said by phone.

Europe’s largest hotel group Accor said on Tuesday it had created a platform to offer housing to medical staff, and would offer up to 2,000 beds in 40 hotels for the homeless.

Such measures will be even more pressing as the virus digs into poorer countries where densely populated slum neighbourhoods create ideal conditions for disease transmission.

“COVID-19 is likely to spread at an even faster rate in informal settlements than elsewhere and with more disastrous consequences,” Farha said via WhatsApp.

“A ‘stay at home’ policy fails to recognise the conditions in informal settlements that make staying at home just as deadly, if not more, than no policy at all,” she said.

(Reporting by Zoe Tabary @zoetabary in London, Thin Lei Win @thinkink in Rome, Umberto Bacchi @UmbertoBacchi in Tbilisi, Annie Banerji @anniebanerji in Delhi and Jillian Kestler-D’Amours @jkdamours in Montreal, editing by Lyndsay Griffiths. Please credit the Thomson Reuters Foundation, the charitable arm of Thomson Reuters, that covers the lives of people around the world who struggle to live freely or fairly. Visit http://news.trust.org)