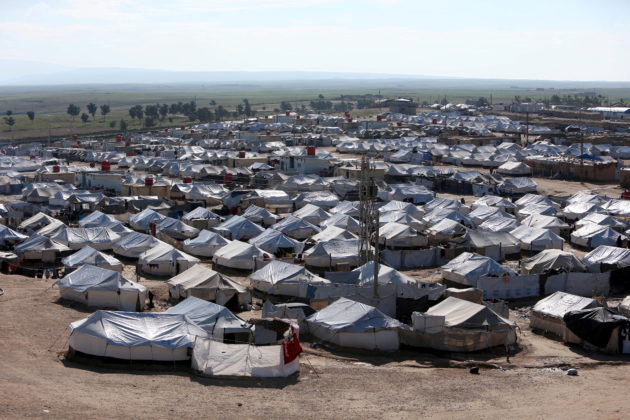 GENEVA (Reuters) – Hundreds of children are incarcerated in adult prisons in northeastern Syria, the International Committee of the Red Cross (ICRC) said on Wednesday, disclosing their plight as inmates for the first time.

The children, mostly boys, have been removed to prisons from al-Hol, a desert camp run by Syrian Kurdish forces for 60,000 people from more than 60 countries associated with Islamic State (IS) fighters, the aid agency said. Most are women and children who fled there after IS’s last enclaves collapsed two years ago.

“Hundreds of children, mostly boys, some as young as 12, are detained in adult prisons, places they simply do not belong,” Fabrizio Carboni, ICRC regional director for the Middle East, told a news briefing.

The ICRC made 36 visits to places of detention across Syria last year, the only agency with such access. It requires private talks with inmates on their treatment and conditions, but its confidential findings are shared only with the authorities.

It has access to some places of detention in northeast Syria – a Syrian Kurdish-controlled area – a spokeswoman said, declining to give details.

The ICRC also renewed its appeal for countries to repatriate their nationals from the al-Hol camp and keep families together, “as international law requires”.

Carboni, who has visited al-Hol four times in the past two years, said: “I really can’t get used to seeing so many children behind barbed wire.”

The ICRC runs a field hospital and provides food and water at the sprawling site. Medical needs remain huge, with a rise in resident children dying last year, including some from preventable conditions, Carboni said.

UNICEF said eight children under 5 years old had died at the camp last August, half from malnutrition-related complications. The other deaths had been due to dehydration from diarrhea, heart failure, internal bleeding and hypoglycemia, the U.N. children’s agency said.