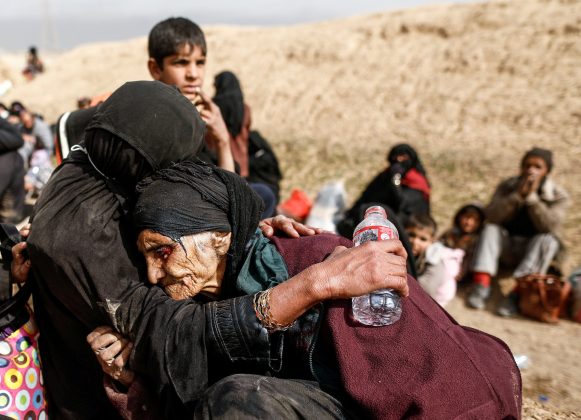 Khatla Ali Abdullah, 90, is embraced as she flees her home as Iraqi forces battle with Islamic State militants in western Mosul. REUTERS/Zohra Bensemra

BAGHDAD (Reuters) – Five children and two women are receiving treatment for exposure to chemical agents near the Iraqi city of Mosul, where Islamic State is fighting U.S.-backed Iraqi forces, the International Committee of the Red Cross said on Friday.

The ICRC “condemns in the strongest possible terms the use of chemical weapons during fighting around the Iraqi city of Mosul”, it said in a statement.

The organization said it did not know which side used the chemical agents that caused blisters, redness in the eyes, irritation, vomiting, and coughing.

The United States has warned that Islamic State could use weapons containing sulfur mustard agents to repel the offensive on the northern Iraqi city.

ICRC medical teams were supporting local medical teams treating the seven patients, who were admitted over the past two days to Rozhawa hospital in Erbil, east of Mosul, the organization said.

The ICRC had reinforced 13 medical centers in areas surrounding Mosul with capacity to treat gas attacks victims, ahead of the offensive that started in October.

Iraqi forces captured the eastern side of Mosul in January after 100 days of fighting and launched their attack on the districts that lie west of the Tigris river on Feb. 19.

Defeating Islamic State in Mosul would crush the Iraqi wing of the caliphate declared by the group’s leader, Abu Bakr al-Baghdadi, in 2014, over parts of Iraq and Syria.

(Reporting by Maher Chmaytelli in Baghdad and Stephanie Ulmer-Nebehay in Geneva; Editing by Dominic Evans)