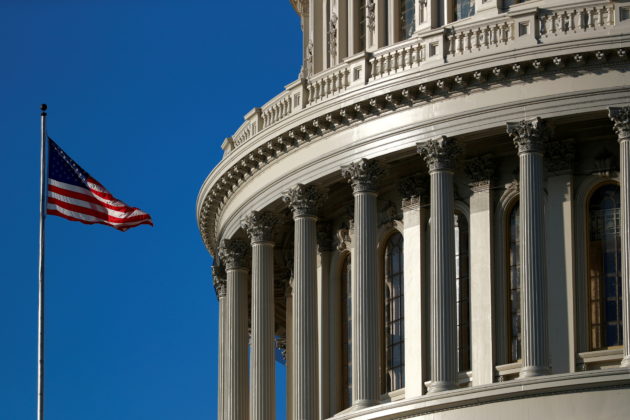 WASHINGTON (Reuters) – In a high-stakes standoff over the U.S. debt ceiling, congressional Republicans believe they see a chance to scale back President Joe Biden’s sweeping domestic agenda while boosting their odds of retaking Congress in 2022.

The Republican gambit passed an initial political test on Tuesday, when the House of Representatives voted 220-211 along party lines to approve a measure to suspend the $28.4 trillion debt ceiling and fund the federal government beyond Sept. 30, when the current fiscal year ends.

Republican Senate Leader Mitch McConnell has made it clear that his caucus, which holds half the chamber’s 100 seats, will block it, seeking to frame the vote as a referendum on a $3.5 trillion Biden domestic spending package the House and Senate will take up in coming weeks.

The stakes are high. Failing to fund federal agencies past Sept. 30 could trigger the third partial government shutdown in a decade and a failure to suspend the debt ceiling by mid-October brings the risk of a historic default that could shake financial markets and even spark a recession.

Both McConnell and Senate Majority Leader Chuck Schumer have used the word “catastrophic” to describe the fallout from a default.

“America must never default. We never have and we never will,” McConnell told reporters on Tuesday. “The debt ceiling will be raised, as it always should be. But it will be raised by the Democrats.”

Republicans, while insisting they want to avoid a crisis, could be relatively insulated from any threat of default.

A Sept. 18-20 Morning Consult poll showed that 42% of registered voters would blame both parties equally for any default, with another 33% blaming Democrats but only 16% blaming Republicans.

McConnell and his fellow Republicans want Democrats to suspend the debt ceiling on their own through a parliamentary maneuver called reconciliation, which Democrats have already used to pass a $1.9 trillion COVID-19 relief bill and intend to use again for Biden’s domestic spending plan.

Schumer denies that the debt-ceiling debate has anything to do with Biden’s agenda and has accused McConnell of “engaging in fantastical feats of sophistry.”

The Treasury Department will exhaust its borrowing authority sometime in October unless the debt limit is suspended. The Democratic bill would suspend the limit on government borrowing through December 2022.

Moderate Democratic Senators Joe Manchin and Kyrsten Sinema are objecting to the size of Biden’s proposed $3.5 trillion package, while House progressives insist they will reject anything smaller. Republicans contend that forcing Democrats to own the debt-ceiling suspension could further undermine their unity and lead to a smaller package.

“There are a lot of moderate Democrats here in the Senate, and for that matter, in the House, who have concerns about the level of spending. It’s a stratospheric amount,” said Senator John Thune, the chamber’s No. 2 Republican.

Republicans also see the debate as a way to draw a bright ideological line between themselves and Democrats, who they claim are being led by self-declared socialists including Senator Bernie Sanders and Representative Alexandria Ocasio-Cortez.

“What’s at stake is not simply a temporary hitting of the debt ceiling or defaulting temporarily or anything like that. It’s really whether we’re going to sit back and let them embed socialism into the institutions of our government,” Senator Kevin Cramer told Reuters.

Some Republicans, who worry about being blamed for a failed vote, have suggested that they could give Democrats consent to pass the debt ceiling and funding measure on a simple majority. But Republican Senator Ted Cruz vowed to block that route.

Others said that their high-profile stand against the Biden agenda could help Republicans turn out the vote in the November 2022 election that will determine control of Congress.

“Anytime you’re having a fight over taxes and spending, it’s good for Republicans,” Thune, who is seeking reelection in South Dakota, told reporters when asked if the showdown could aid Republican candidates.