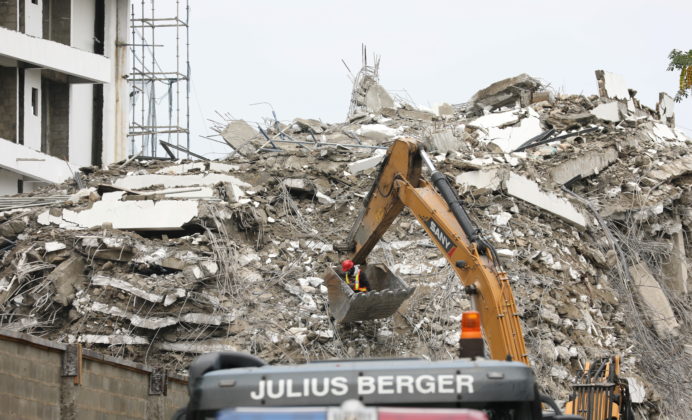 A rescue worker is seen on an excavator as search and rescue effort continues at the site of a collapsed building in Ikoyi, Lagos, Nigeria November 2, 2021. REUTERS/Temilade Adelaja

LAGOS (Reuters) -Rescuers on Tuesday dug through rubble searching for survivors a day after a luxurious high-rise building collapsed while under construction in Nigeria’s commercial capital Lagos, as officials put the death toll at six and scores were reported missing.

Emergency services used earth moving equipment to lift chunks of masonry at the site in the affluent neighborhood of Ikoyi after torrential rains pounded Lagos overnight and briefly stopped the search. Large trailers were brought in to help move debris, blocking one of Ikoyi’s main roads.

Building collapses are frequent in Africa’s most populous country, where regulations are poorly enforced and construction materials often substandard.

“Currently all responders are on the ground as search and rescue is ongoing,” Lagos state official Olufemi Oke-Osanyintolu said, adding that the death toll stood at six.

Seven people have so far been rescued alive as excavators sifted rubble from the heaps of shattered concrete and twisted metal that engulfed the site where the building once stood.

Witnesses say up to 100 people were missing after the luxury residential structure crumbled, trapping workers under a pile of rubble.

President Muhammadu Buhari has called for rescue efforts to be stepped up.

Agitated families whose relatives and loved ones were missing refused to speak to media, although they could be heard accusing emergency services of lacking urgency after rescue efforts were briefly halted due to the rains.

New high-end apartments have been springing up in Ikoyi, and the collapsed building was part of three towers being built by private developer Fourscore Homes, where the cheapest unit was selling for $1.2 million.

The project developer and owner of Fourscore Homes, Olufemi Osibona told a local news channel in August that he had developed buildings in Peckham and Hackney in Britain and that the Ikoyi apartments were the start of bigger projects he planned in Nigeria.

Osibona could not be reached for comment on Tuesday. Some local media reports said he may have been among those trapped.

A narrator in a promotional video on Fourscore Homes Instagram page says the complex “bestrides the Ikoyi landscape like a colossus,” and showed the buildings as each having rooftop pools and being kitted out with luxury fittings.

Telephone calls to numbers listed for Fourscore Homes and the main building contractor did not ring through on Tuesday.