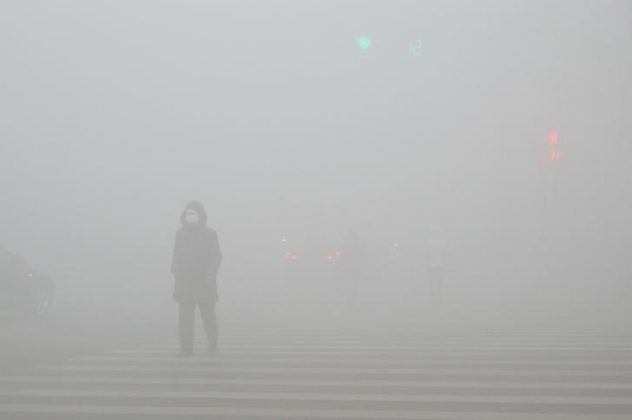 People walk past a street in heavy smog during a polluted day in Weifang, Shandong province, December 20, 2016. REUTERS/Stringer

BEIJING (Reuters) – Residents of China’s capital were wearing face masks and using air purifiers to try to avoid heavy pollution blanketing the city for a fifth day on Wednesday, but others were giving up the fight and joining a rush of “smog avoidance” travel.

Beijing led the country for searches on the travel website Qunar.com for “avoid smog”, “wash your lungs” and other terms related to traveling to escape pollution, said Michelle Qi, a spokeswoman for the site’s parent company, Ctrip.com.

Northern China has been shrouded in almost record pollution all week, disrupting flights, traffic and shipping, and closing factories and schools.

Searches for plane tickets from Beijing to southern China, including coastal locations like Hainan province, quadrupled this week, Qi said. Popular foreign destinations include Thailand and Japan, she said

“Good air quality definitely would be one reason to go,” she said.

Pollution alerts have become increasingly common in China’s northern industrial heartland, especially during winter when energy demand – much of it met by coal – rises sharply.

Some Beijing residents, like Jane Wang, 27, and her family, can’t get out of town fast enough.

“My husband and I really wanted to go but our company didn’t let us take off work so we had no choice but to wear a mask and go to work coughing,” said Wang, who works in an automotive technology research center.

Her mother flew to Hainan, where the family has a holiday house, on Monday to avoid the pollution, Wang said.

For those who can’t go too far, travel websites including Ctrip advertise hotels with air filtration systems in places across north China, where numerous cities having issued pollution red alerts.

“Enjoy a micro forest, live in a fresh air room: enjoy your own a complementary air filtration machine,” reads a banner advertisement on Ctrip’s page for hotel bookings on Wednesday, with a link to a curated list of hotels with the feature.