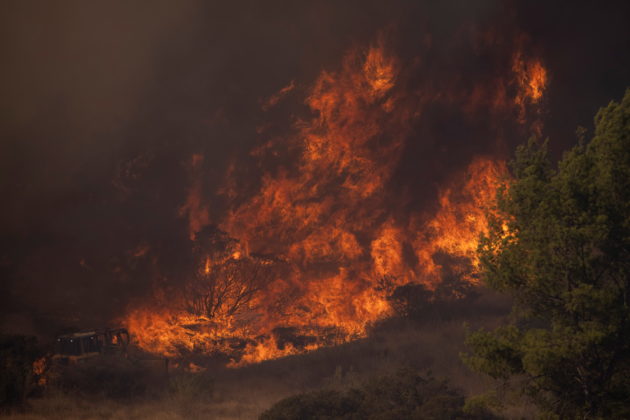 LOS ANGELES (Reuters) – A blaze that ignited overnight in a single-family home injured two firefighters and forced residents of a rustic Southern California canyon to flee their homes on Thursday, as flames tore across some 4,000 acres of dry brush and wooded hillsides.

The Bond Fire, which broke out at about 10 p.m. on Wednesday night, was driven through Silverado Canyon in Orange County by gusty Santa Ana winds. Authorities issued evacuation warnings to thousands of people.

“There were two firefighters that were injured while battling the Bond Fire this afternoon,” the Orange County Fire Authority said on Twitter. “They were treated by firefighter paramedics and transported to a hospital for further care.”

The woodsy canyon, miles from Southern California’s suburban sprawl and reached by a single winding road, is home to an eclectic mix of residents including artists, horse owners and ranchers.

Some 500 firefighters aided by water-dropping aircraft battled the flames, which sent smoke drifting across Orange and Los Angels counties, but had not achieved any containment as of mid-afternoon on Thursday.

Fire managers said they believed homes and other structures had been damaged by the blaze but could not yet provide details. Power was knocked out to some 50,000 homes across the region.

The Red Cross set up an evacuation point at a community college near the mouth of the canyon.

Since the start of the year, wildfires have scorched more than 6,500 square miles (17,000 square km) of California land according to the California Department of Forestry and Fire Protection.

The state has grappled with fires of record-breaking intensity and size in recent years and 2020 has been particularly difficult.

“We’re in December and we now have active wildfires still in our state,” California Governor Gavin Newsom said at a press briefing. “These Santa Ana winds have been quite intense.”