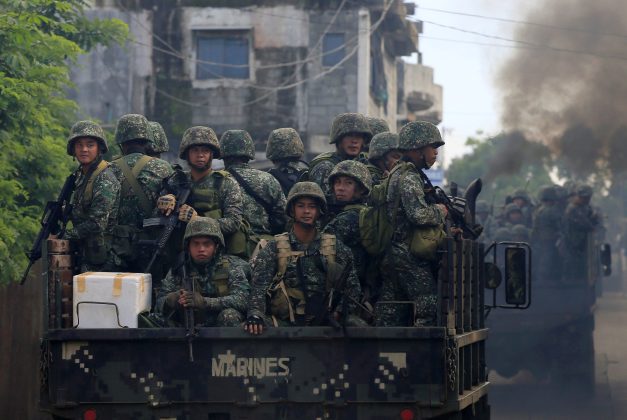 Soldiers onboard military trucks ride along the main street as government troops continue their assault on insurgents from the Maute group, who have taken over large parts of Marawi City, Philippines. REUTERS/Romeo Ranoco

MARAWI CITY, Philippines (Reuters) – More than 160 civilians walked out of the besieged Philippines city of Marawi just after dawn on Saturday, deceiving Islamist fighters they encountered by hiding the identity of the many Christians among them.

The audacious exodus came after text message warnings that a major assault by Philippines aircraft and ground troops was imminent in the center of the southern city, where some 250 militants and more than 2,000 civilians remain trapped.

“We saved ourselves,” said Norodin Alonto Lucman, a well-known former politician and traditional clan leader who sheltered 71 people, including more than 50 Christians, in his home during the battle that erupted on May 23 in the town of more than 200,000 on the southern island of Mindanao.

“There’s this plan to bomb the whole city if ISIS don’t agree to the demands of the government,” he said, referring to local and foreign fighters who have sworn allegiance to the ultra-radical Islamic State.

Many evacuees told Reuters they had received text messages warning of a bombing campaign.

“We had a tip from the general commander that we should go out,” said Leny Paccon, who gave refuge to 54 people in her home, including 44 Christians. “When I got the text, immediately we go out … about 7 o’clock.”

By then, Lucman and his guests had begun their escape march from another area, holding white flags and moving briskly.

“As we walked, others joined us,” he told reporters. “We had to pass through a lot of [militant] snipers.”

Some of the civilians were stopped and asked if there were any Christians among them, said Jaime Daligdig, a Christian construction worker.

“We shouted ‘Allahu akbar’,” he told Reuters, adding that thanks to that Muslim rallying cry they were allowed to pass.

Those who fled included teachers from Dansalan College, a protestant school torched on the first day of the battle.

Christians have been killed and taken hostage by the militants, a mix of local fighters from the Maute Group and other Islamist outfits, as well as foreigners who joined the cause under the Islamic State banner.

Lucman said that many of those trapped were on the verge of starvation, which also gave them the courage to leave.

He described a scene of devastation in the town center, where the streets were strewn with rotting bodies and debris. “I almost puked as we were walking,” Lucman said, estimating that there were more than 1,000 dead.

Lucman and Paccon said militants had knocked on their doors while they sheltered the terrified Christians. They shooed them away saying there were women and children inside.

Adding to the anxiety, both said they were within 100 meters (320 feet) of militant command posts. Although the Philippines military knew civilians remained in their homes, ordnance exploded nearby repeatedly over the past week.

Resident Asnaira Asis said militants knocked on her door too, offering money or food if she handed over her 11-year-old son. “They wanted him to be a fighter,” she told Reuters after joining the morning exodus. “I said no.”

After an impromptu ceasefire as the civilians evacuated, bombing and ground skirmishes continued on Saturday, and FA50 fighter jets dropped bombs on the town center.

Philippines Defence Secretary Delfin Lorenzana said the conflict would be over soon but he gave no operational plans. He said there were 250 militants still in the town, far more than the 20-30 cited by the military on Friday.

“They can still put up a good fight. That’s why it’s giving us difficulty in clearing the area,” he told a news conference.

Lorenzana said there was still a big cohort of foreign fighters in Marawi.

Officials have said militants from as far away as Saudi Arabia, Pakistan, Chechnya and Morocco joined the battle, raising concerns that Islamic State is seeking to establish a regional foothold there.