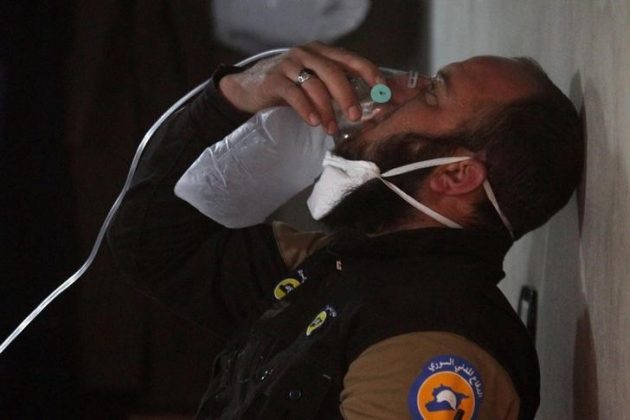 The Syrian government has repeatedly denied using chemical weapons. The Syrian U.N. mission was not immediately available to comment on the allegations by Human Rights Watch, which cited interviews with witnesses and medical personnel.

The Organisation for the Prohibition of Chemical weapons, a global watchdog, has said sarin or a similar banned toxin was used in the April 4 strike.

Human Rights Watch said that before the April 4 attack on Khan Sheikhoun, government warplanes also appeared to have dropped nerve agents on eastern Hama on Dec. 11 and 12, 2016, and northern Hama, near Khan Sheikhoun, on March 30, 2017.

“All four of these attacks were in areas where opposition or ISIS forces were launching an offensive that threatened government military air bases,” Human Rights Watch Executive Director Ken Roth told a news conference at the United Nations.

“The decision to ratchet up to this level seems to have been related to that unfavorable battlefield situation,” he said.

The report said an opposition-affiliated activist and local residents provided the names of 64 people they say died from exposure to chemicals in the December attacks, which were in an area controlled by Islamic State militants.

It said no one died in the March 30 attack but dozens of people were injured, according to residents and medical workers.

“The pattern shows that the Syrian government retained sarin or some similar nerve agent after its August 2013 eastern Ghouta attack despite having agreed to hand over all chemical weapons to U.N. inspectors,” Roth said.

Syria agreed to destroy its chemical weapons in 2013 under a deal brokered by Moscow and Washington.

Roth said Human Rights Watch found that the remnants of a bomb at the site of the April 4 attack “appear consistent with the characteristics with a Soviet-made air-dropped chemical bomb specifically designed to deliver sarin.” The report said the remnants of the bomb appears similar to a KhAB-250.

Human Rights Watch called on the U.N. Security Council to impose an arms embargo and targeted sanctions on Syria and refer the situation in the country to the International Criminal Court (ICC).

Russia and China blocked a Western bid for a referral to the ICC in 2014 and this February blocked a bid to impose sanctions over accusations of chemical weapons attacks.