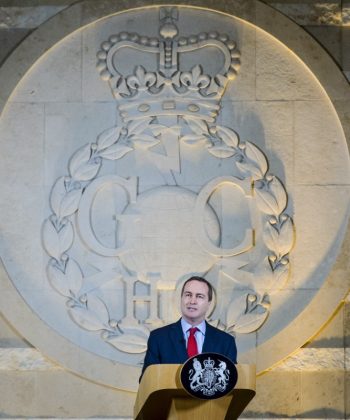 LONDON (Reuters) – Russia is causing cyberspace mayhem and should face retaliation if it continues to undermine democratic institutions in the West, the former head of Britain’s GCHQ spy agency said on Monday.

Russia denies allegations from governments and intelligence services that it is behind a growing number of cyber attacks on commercial and political targets around the world, including the hackings of recent U.S. and French presidential election campaigns.

Asked if the Russian authorities were a threat to the democratic process, Robert Hannigan, who stepped down as head of the UK’s intelligence service in March, said: “Yes … There is a disproportionate amount of mayhem in cyberspace coming from Russia from state activity.”

In his first interview since leaving GCHQ, Hannigan told BBC radio that it was positive that French President Emmanuel Macron and German Chancellor Angela Merkel had publicly “called this out recently”.

Standing alongside Russian President Vladimir Putin in May, Macron said state-funded Russian news outlets had sought to destabilize his campaign while the head of Germany’s domestic intelligence agency said last week it was expecting Russia to try to influence the German election in September.

“Ultimately people will have to push back against Russian state activity and show that it’s unacceptable,” he said.

“It doesn’t have to be by cyber retaliation, but it may be that is necessary at some time in the future. It may be sanctions and other measures, just to put down some red lines and say that this behavior is unacceptable.”

Hannigan also said it would be a mistake to force social media companies to allow intelligence agencies to access services protected by encryption through so-called “back door” access.

“The best you can do with end-to-end encryption is work with companies in a cooperative way to find ways around it frankly,” he said. He said such “back doors” would weaken systems.

“Legislation is a blunt last resort because frankly extremism is very difficult to define in law and you could spend all your time in court arguing about whether a particular video crosses the line or not,” he said.