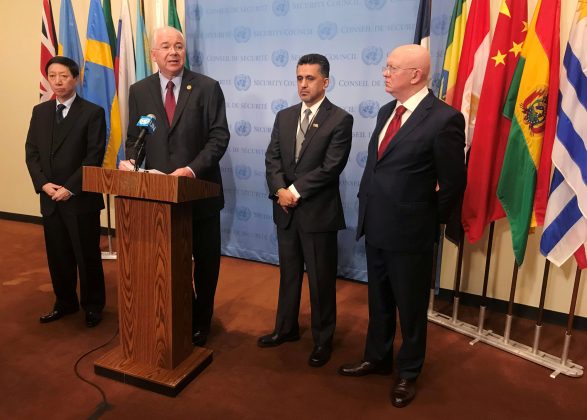 UNITED NATIONS (Reuters) – Russia, China, Egypt and Bolivia boycotted an informal public United Nations Security Council meeting on Venezuela on Monday organized by the United States, saying the 15-member body should not be involved in the situation.

“The issue is about meddling with the internal domestic affairs of Venezuela,” Russian U.N. Ambassador Vassily Nebenzia told reporters, adding that he hoped the country could settle its issues peacefully without any external interference.

U.S. Ambassador to the United Nations Nikki Haley told the meeting: “The fact that the (Venezuelan) government would go so far as to try and get people not to show up to a meeting is guilt. And that’s unfortunate.”

Venezuela is suffering from a harsh economic crisis and President Nicolas Maduro’s government has clamped down on the opposition, jailing or otherwise barring from office many dissenting leaders and activists.

Dozens of people have died in violence since the opposition began a sustained wave of protests in April. Met by rubber bullets, water cannon and tear gas fired by the National Guard, the protesters say the crisis demands an early presidential election that they are sure Maduro would lose.

His popularity has been pounded lower by triple-digit inflation and acute food and medicine shortages.

“We received pressure from regional partners not to have this meeting,” Haley said. “This goal is not to degrade anyone. This is not to humiliate a region. This is only to lift up the region.”

Uruguay’s Deputy U.N. Ambassador Luis Bermudez attended the U.N. meeting, but said his country did not believe the situation in Venezuela was a threat to international peace and security.

“The meeting is a hostile and clearly interfering act of the United States that undermines the principle of sovereignty of a member state of the U.N.,” Ramirez said. “We condemn this act of political manipulation.”

The U.N. Security Council also met behind closed doors in May, at Washington’s request, to discuss the crisis in Venezuela.