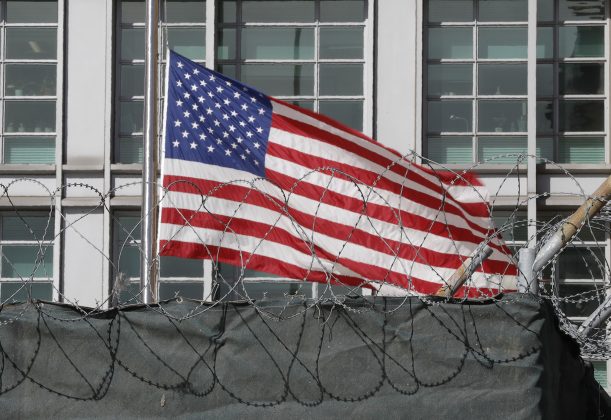 FILE PHOTO: A flag flies behind an enclosure on the territory of the U.S. embassy in Moscow, Russia March 28, 2018. REUTERS/Tatyana Makeyeva/File Photo

MOSCOW (Reuters) – Russia’s FSB state security service said on Monday it had detained an American citizen suspected of spying in Moscow and had opened a criminal case against him.

The FSB said the American had been detained on December 28 but it gave no details of the nature of his alleged espionage.

The English-language service of TASS news agency named the American as Paul Whelan but Reuters was unable to independently confirm the exact spelling of his name.

Russia’s foreign ministry told TASS it could not provide further detail on the case, but said the U.S. Embassy in Moscow had been informed.

The U.S. Embassy would not comment directly, referring inquiries to the State Department in Washington.

Under Russian law, espionage can carry between 10 and 20 years in prison.

Earlier this month Russian national Maria Butina pleaded guilty in a U.S. court to a conspiracy charge in a deal with prosecutors and admitted to working with a top Russian official to infiltrate American conservative activist groups and politicians as an agent for Moscow.

In February he charged 13 Russians and three Russian companies as part of a criminal and espionage conspiracy to tamper in the election to support Trump and disparage his Democratic opponent Hillary Clinton.

Russia has denied interfering in the election. Trump has denied colluding with Moscow.

Russia’s relations with the United States plummeted when Moscow annexed the Crimean peninsula from Ukraine in 2014 and Washington and Western allies have imposed a broad range of sanctions on Russian officials, companies and banks.

(Reporting by Gabrielle Trault-Farber in Moscow and Will Dunham in Washington; Editing by Richard Balmforth, William Maclean)