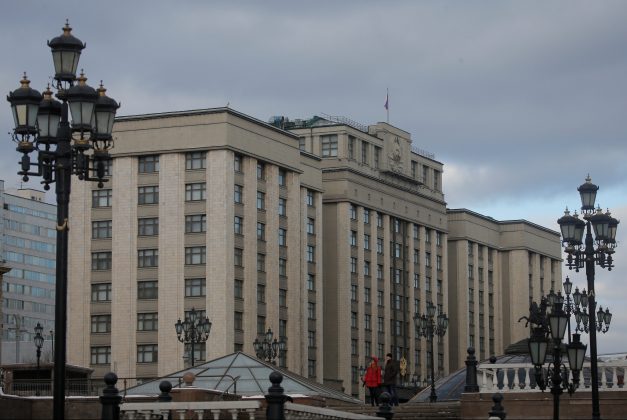 By Polina Nikolskaya and Tom Balmforth

MOSCOW (Reuters) – Russian lawmakers on Thursday voted to postpone the second reading of a bill being discussed in the lower house of parliament that would make it a crime to comply with Western sanctions on Russia.

The lower house said it would hold talks next week with businesses before proceeding further with discussion of the draft law, a day after business lobby groups on Wednesday publicly voiced opposition to it.

“We support postponing (discussion) for further consultations because of numerous appeals and insufficient legal preparation,” said Nikolai Kolomeytsev, a lawmaker for the Communist party, which often backs the Kremlin on important issues.

Russian lawmakers in a first reading on Tuesday approved a bill making it a crime punishable by up to four years in jail to refuse to supply services or do business with a Russian citizen, citing U.S. or other sanctions.

The Russian Union of Industrialists and Entrepreneurs said in a statement on Wednesday that the bill creates risks of unreasonable criminal prosecution of Russian and foreign citizens, and could harm the investment climate.

Business representatives will be invited to discuss the bill with lawmakers next Wednesday.

“I think we can find a construction under which these fears can be removed. And then the law will pass without any fears and, generally speaking, we need it,” lawmaker Valery Gartung said on Thursday. He is a member of the Just Russia party which often allies itself with the Kremlin.

The bill is one of two items of legislation drawn up by lawmakers in response to the United States’ decision to impose sanctions on Russia last month.

Washington blacklisted some of Russia’s biggest companies and businessmen, striking at allies of President Vladimir Putin to punish Moscow for alleged meddling in the 2016 U.S. presidential election and other “malign activities”.

Later on Thursday, lawmakers in a second reading approved the second item of legislation. The bill would give the government authority to ban trade in certain items with countries deemed to be unfriendly to Moscow.

Under the bill, the Russian president would decide which products would be affected by the restrictions, and any decision would be subject to approval from parliament.

The legislation also bars affected countries and those countries’ citizens from taking part in the privatization of Russian property.

The legislation has been diluted since it was first put forward. Lawmakers originally proposed restricting imports of U.S.-made software and farm goods, U.S. medicines that can be sourced elsewhere, and tobacco and alcohol.

The legislation must pass a third reading, before being approved by the upper house of parliament and signed by President Vladimir Putin.