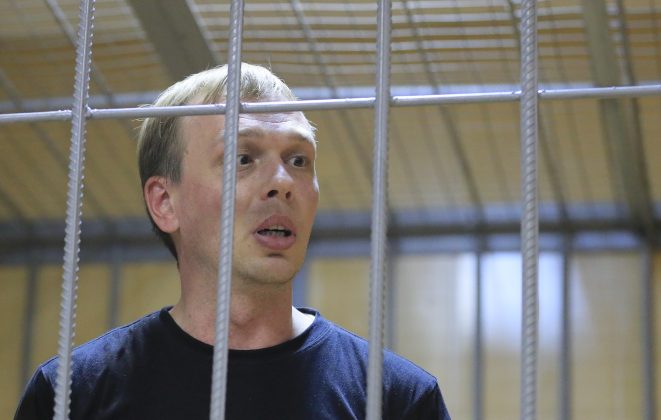 FILE PHOTO: Russian investigative journalist Ivan Golunov, who was detained by police and accused of drug offences, speaks inside a defendants' cage as he attends a court hearing in Moscow, Russia June 8, 2019. REUTERS/Tatyana Makeyeva

MOSCOW (Reuters) – Russian police on Tuesday dropped drugs charges against journalist Ivan Golunov, a rare U-turn by the authorities in the face of anger from his supporters who alleged he was framed for his reporting and threatened to stage a mass protest in Moscow.

Golunov, a 36-year-old journalist known for exposing corruption among Moscow city officials, was detained by police on Thursday last week and accused of serious drug offenses which he flatly denied.

But the crude way supporters said Golunov was set up triggered an unusual show of media unity and an uncharacteristically swift response from authorities nervous about social unrest at a time when President Vladimir Putin already faces disquiet over living standards.

Interior Minister Vladimir Kolokoltsev said in a statement that the criminal case against Golunov was being dropped due to a lack of evidence of any wrongdoing on his part. He said he would be freed from house arrest later on Tuesday.

Some police officers involved in the case were being temporarily removed from duty pending an investigation, he said, adding that he planned to ask Putin to dismiss other more senior police personnel.

“I believe that the rights of every citizen, regardless of his profession, must be protected,” said Kolokoltsev.

Before the police backed down, nearly 25,000 people had signed up to a Facebook page expressing their intention to take part in a protest march on Wednesday in solidarity with Golunov.

The authorities had said the protesters did not have approval, and that their protest could threaten public safety.

The march presented the Kremlin with a quandary: either use force to break up the protest, and risk provoking more anger, or stand aside and let the protest take place, which risked revealing weakness to the Kremlin’s opponents.

The charges against Golunov inflamed opinion among urban professionals, a group that is in a minority nationwide, but which has outsize influence in Moscow.