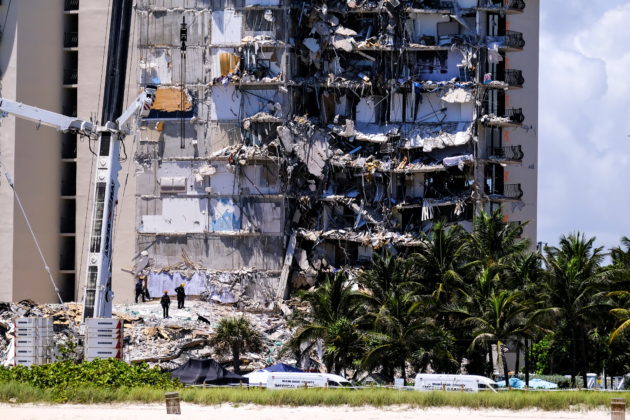 (Reuters) – With search-and-rescue teams still sifting through the rubble of a collapsed Florida condominium building, authorities by late Monday had confirmed 11 victims of the deadly disaster and their identities, while some 150 people remain missing.

Those recovered from rubble in the oceanside town of Surfside included a young Puerto Rican graphic artist who refused to let a disability dampen his spirits, a devoted couple who had been married for nearly 60 years and a volunteer Little League baseball coach.

Here are brief profiles of nine of them:

Marcus Guara, 52, had just started a new job in November as regional sales manager at Kassatex New York, a maker of towels, linens and other textiles, according to his social media posts. He had held a series of sales jobs since graduating from the University of Miami in 1990, he reported on Linked In. His Facebook account was dominated by family photos and fundraiser posts for charities, mostly the ALS Association and St. Jude Children’s Research Hospital.

Also missing were his wife, Ana Guara, 41, and their daughters, Lucia, 11, and Emma, 4. Last November, he wrote on Facebook that his “pride was overwhelming” when Lucia asked him to mail a letter to St. Jude Hospital stuffed with her piggy bank savings because “they need it more than I do.”

Luis Andres Bermudez, a young graphic artist from Puerto Rico, was inspiring example of courage who never let a disability keep him from his dreams or dampen his sunny disposition, his former teacher said. Andres Bermudez, 26, lived with his mother Ana Ortiz, 46, who also was identified as one of the casualties of the collapse.

“Luis Andres is an example of courage and bravery FOR ALL of us,” said Jose J. Ortiz Carlo, a teacher who had Andres Bermudez in a photography class at Robinson School in Puerto Rico, where he graduated in 2014.

Despite being confined to a wheelchair because of muscular dystrophy, Andres Bermudez, known as Luiyo, never missed school and was always smiling, the teacher said on Facebook.

In 2018, he launched Saucy Boyz Clothing, a fashion line of T-shirts and caps with his artwork on them that he called “a dream come true for me” on social media.

The young man’s father, Luis Didi Bermudez, who was separated from his mother and was not in the building when it collapsed, mourned his son, saying in a Facebook post translated from Spanish, “You are and will be the best in my life.”

Alex Garcia, a close friend of Ortiz, told The Miami Herald that she had just recently married his friend, Frankie Kleiman, who was also missing in the wreckage. Ortiz was “a rock star” who was committed to giving her son the best possible life, Garcia said.

A couple identified by police as Leon Oliwkowicz, 80, and his wife, Christina Beatriz Elvira, 74, were both originally from Venezuela and were active in the Ultra Orthodox Chabad Lubavitch community, according to the COLlive.com, a news outlet that covers Chabad Lubavitch communities. In 2019, the couple, donated a Torah scroll to Yeshivas Ohr Eliyahu – Lubavitch Mesivta of Chicago, a school where their daughter works as a secretary. Venezuelan journalist Shirley Varnagy, a friend of their daughter, said on Instagram that the couple were among six Venezuelans who lived in the building.

Antonio Lozano, 83, and Gladys Lozano, 79, would joke about who would die first because they didn’t want to live without each other, their son Sergio told Miami ABC affiliate WPLG. The couple would have celebrated their 59th anniversary on July 21, said Sergio, who had dinner with them hours before the deadly collapse in the early hours of Thursday. “Both were avid donators to non-profit organizations, especially to cancer since my grandmother lost her mother to the sickness,” the couple’s grandson, Brian, told ABC News in a statement. “Always providing for anyone who’s in need or just to spark a smile on someone’s face. Their souls were truly beautiful and are now blessed.”

Manuel LaFont, 54, was with his 10-year-old son on the baseball field almost every day. Those who knew the Little League coach, known as Manny, said he was devoted to helping kids become better players, according to People magazine. The father of two and business consultant was asleep when the building collapsed, his ex-wife, Adriana, told the USA TODAY Network. She confirmed his death on Facebook, writing, “So many memories inside the walls that are no more today, forever engraved experiences in the heart! My manny, who was my partner for so many years, father of my children, who scolds me and loves me at the same time.”

Stacie Fang, 54, was the mother of one of the few people known to have survived the collapse. Her son, Jonah Handler, 15, was pulled from the wreckage hours after the building fell.

Fang was vice president at a firm that puts on an annual event for customer relationship management, retail and marketing executives, according to her LinkedIn account. A former resident of New York City’s Staten Island, she was a graduate of New York’s Pace University. “There are no words to describe the tragic loss of our beloved Stacie,” her family said in a statement.

(Reporting by Peter Szekely in New York and Linda So in Washington; Editing by Alistair Bell, Chizu Nomiyama and Steve Orlofsky)