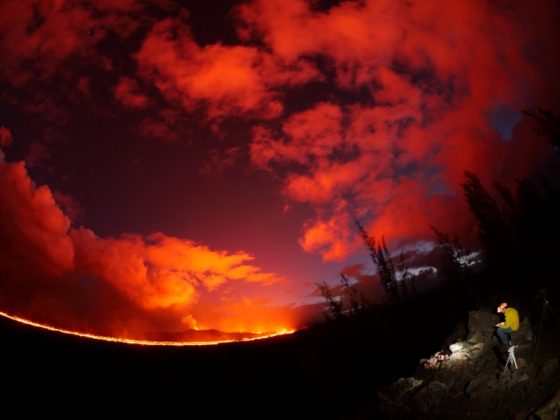 A USGS geologist making observations of the fissure 8 lava channel at sunset is pictured in this July 3, 2018 fisheye lens handout photograph near the Kilauea volcano eruption in Hawaii, U.S. USGS/Handout via REUTERS

By Terray Sylvester and Jolyn Rosa

PAHOA, Hawaii (Reuters) – Dressed in heavy cotton, a helmet and respirator, Jessica Ball worked the night shift monitoring “fissure 8,” which has been spewing fountains of lava as high as a 15-story building from a slope on Hawaii’s Kilauea volcano.

The lava poured into a channel oozing toward the Pacific Ocean several miles away. In the eerie orange nightscape in the abandoned community of Leilani Estates, it looked like it was flowing toward the scientist, but that was an optical illusion, Ball said. 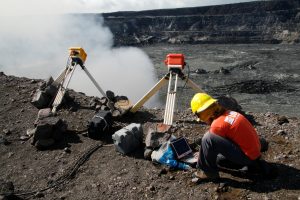 “The volcano is doing what it wants to. … We’re reminded what it’s like to deal with the force of nature,” said Ball, a geologist with the U.S. Geological Survey.

Scientists have been in the field measuring the eruptions 24 hours a day, seven days a week since Kilauea first exploded more than two months ago. They are a mix of USGS staff, University of Hawaii researchers and trained volunteers working six-to-eight-hour shifts in teams of two to five.

They avoid synthetics because they melt in the intense heat and wear gloves to protect their hands from sharp volcanic rock and glass. Helmets protect against falling lava stones, and respirators ward off sulfur gases.

This is not a job for the faint hearted. Geologists have died studying active volcanoes. David Alexander Johnston, a USGS volcanologist was killed by the 1980 eruption of Mount St. Helens in Washington state. In 1991, American volcanologist Harry Glicken and his French colleagues Katia and Maurice Krafft were killed while conducting avalanche research on Mount Unzen in Japan.

Ball, a graduate of the State University of New York at Buffalo, located in upstate New York near the Canadian border, compared Kilauea’s eruptions to Niagara Falls.

“It gives you the same feeling of power and force,” she said. 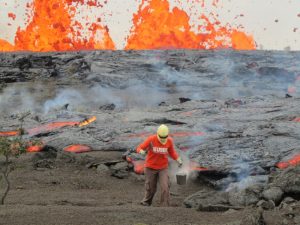 Kilauea, which has been erupting almost continuously since 1983, is one of the world’s most closely monitored volcanoes, largely from the now-abandoned Hawaiian Volcano Observatory at the summit. But the latest eruption is one of Kilauea’s biggest and could prove to be a bonanza for scientists.

Ball and the USGS teams are studying how the magma – molten rock from the earth’s crust – tracks through a network of tubes under the volcano in what is known as the “Lower East Rift Zone,” before ripping open ground fissures and spouting fountains of lava.

They are trying to discover what warning signs may exist for future eruptions to better protect the Big Island’s communities, she said.

Fissure 8 is one of 22 around Kilauea that have destroyed over 1,000 structures and forced 2,000 people to evacuate. They are what make this volcanic eruption a rare event, Ball said.

“They’re common for Kilauea on a geologic time scale, but in a human time scale it’s sort of a career event,” she said.

Meanwhile, the summit is erupting almost every day with steam or ash, said Janet Snyder, spokeswoman for the County of Hawaii, where Kilauea is located.

Scientists had thought the steam explosions resulted from lava at the summit dropping down the volcano’s throat into groundwater. This was based on Kilauea’s 1924 eruption, to which the current one is most often compared.

But the explosions this time have released lots of sulfur dioxide gas, which means magma is involved, said Michael Poland, scientist-in-charge at Yellowstone Volcano Observatory, one of many volcanologists seconded to Kilauea.

“So we have already made a conceptual leap, leading us to believe it was different from what we had understood,” he said.

Poland and other scientists pulled equipment and archives out of the abandoned observatory at the volcano summit after hundreds of small eruption-induced quakes damaged the structure, and have decamped to the University of Hawaii in Hilo on the Big Island.

The archives included photos, seismic records and samples, some 100 or more years old, Poland said. “These materials are invaluable to someone who says, ‘I have this new idea, and I want to test it using past data.'”Now the second longest Kilauea eruption on record, surpassed only by one in 1955, this eruption offers far better research opportunities than previous events, Ball said.

“We’ve got much better instruments and we’ve got longer to collect the data,” she said.