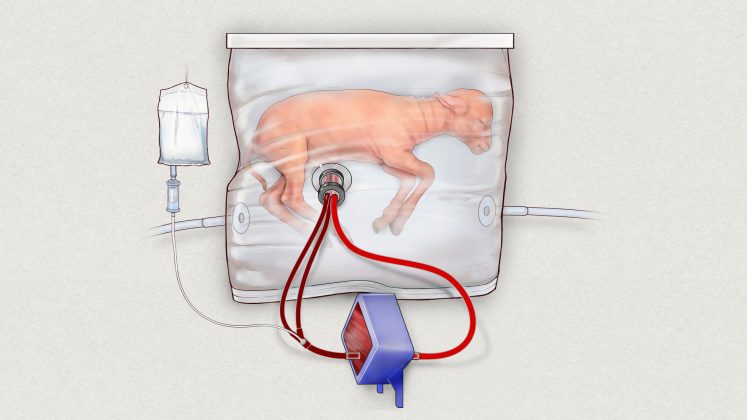 LONDON, (Reuters) – Scientists in the United States have developed a fluid-filled womb-like bag known as an extra-uterine support device that could transform care for extremely premature babies, significantly improving chances of survival.

In pre-clinical studies with lambs, the researchers were able to mimic the womb environment and the functions of the placenta, giving premature offspring a crucial opportunity to develop their lungs and other organs.

Around 30,000 babies in the United States alone are born critically early – at between 23 and 26 weeks of gestation, the researchers told reporters in a telephone briefing.

At that age, a human baby weighs little more than 500 grams, its lungs are not able to cope with air and its chances of survival are low. Death rates are up to 70 percent and those who do survive face life-long disability.

“These infants have an urgent need for a bridge between the mother’s womb and the outside world,” said Alan Flake, a specialist surgeon at the Children’s Hospital of Philadelphia who led the development of the new device.

His team’s aim, he said, was to develop an extra-uterine system where extremely premature babies can be suspended in fluid-filled chambers for a vital few weeks to bring them over the 28-week threshold, when their life chances are dramatically improved.

It could take up to another 10 years, but by then he hopes to have a licensed device in which babies born very prematurely are given the chance to develop in fluid-filled chambers, rather than lying in incubators being artificially ventilated.

“This system is potentially far superior to what hospitals can currently do for a 23-week-old baby born at the cusp of viability,” Flake said. “This could establish a new standard of care for this subset of extremely premature infants.”

The team spent three years evolving their system through a series of four prototypes – beginning with a glass incubator tank and progressing to the current fluid-filled bag.

Six preterm lambs tested in the most recent prototype were physiologically equivalent to a 23- or 24-week-gestation human baby and were able to grow in a temperature-controlled, near-sterile environment, Flake said.

The scientists made amniotic fluid in their lab and set up the system so that this flowed into and out of the bag.

“Fetal lungs are designed to function in fluid. We simulate that environment … allowing the lungs and other organs to develop while supplying nutrients and growth factors,” he said.

Flake said the success of the system, details of which were published on Tuesday in the journal Nature Communications, was due to its mimicking life in the uterus as closely as possible.

It has no external pump to drive circulation, because even gentle artificial pressure can fatally overload an underdeveloped heart, and there is no ventilator, because the immature lungs are not yet ready to breathe air.

Instead, the baby’s heart pumps blood via the umbilical cord into a low-resistance oxygenator that acts as a substitute for the placenta in exchanging oxygen and carbon dioxide.

Flake’s team plans to refine the system further and then downsize it for human infants, who are around a third of the size of the lambs used in the study.