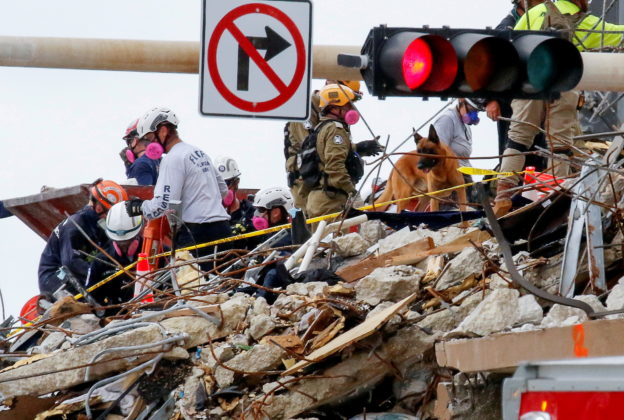 SURFSIDE, Fla. (Reuters) -Another four bodies were found overnight in the shattered ruins of a collapsed Miami-area condominium tower, the mayor of Miami-Dade County said on Wednesday, bringing the confirmed death toll to 16 nearly a week after the building fell.

Nobody has been pulled alive from the mounds of pulverized concrete, splintered lumber and twisted metal since the early hours of the disaster, with 147 people still unaccounted for.

Officials have said they still harbor hope of finding survivors.

Investigators have not concluded what caused nearly half of the 40-year-old Champlain Towers South condo to crumple as residents slept in the early hours of last Thursday.

But a 2018 engineer’s report on the 12-floor, 136-unit complex, prepared ahead of a building safety recertification process, found structural deficiencies that are now the focus of inquiries.

As recently as April, the condo association’s president warned residents in a letter that severe concrete damage identified by the engineer around the base of the building had since grown “significantly worse.”