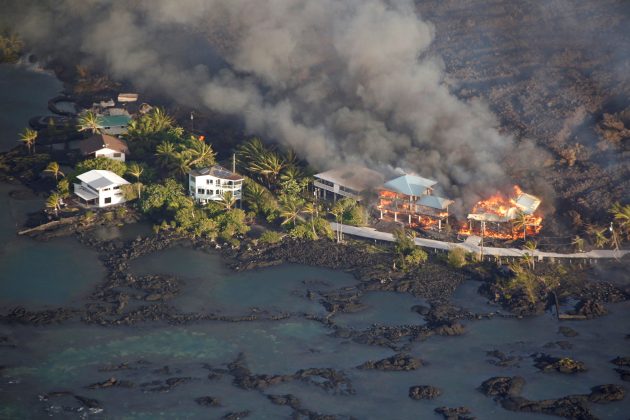 Lava destroys homes in the Kapoho area, east of Pahoa, during ongoing eruptions of the Kilauea Volcano in Hawaii, June 5, 2018. REUTERS/Terray Sylvester

PAHOA, Hawaii (Reuters) – A growing river of molten rock flowing from a fissure at the foot of Kilauea Volcano is believed to have demolished scores of additional homes and filled in a small bay at the eastern tip of Hawaii’s Big Island, civil defense officials said on Tuesday. 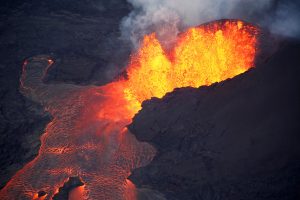 The latest estimates – up to 80 more structures than previously counted as destroyed by lava smothering two newly evacuated subdivisions – could bring the total number of homes and other buildings lost over the past month to nearly 200.

Such a tally would put property losses from the current upheaval of Kilauea, which entered its 34th day on Tuesday, on par with the 215 structures destroyed by lava during all 35 years of the volcano’s last eruption cycle, which began in 1983.

The Hawaii County Civil Defense agency was putting the confirmed number of buildings lost to the current eruption at 117 on Monday, mostly residential properties. About 80 of those were destroyed in the Leilani Estates community, where lava-spouting fissures in the ground first opened on May 3 downhill from the volcano’s eastern flank.

Another three-dozen homes were confirmed destroyed at the weekend when a large lava stream creeping 6 miles (10 km) across the landscape reached the far eastern edge of the Big Island, pouring into the ocean at Kapoho Bay.

A civil defense official told Reuters on Tuesday at least 60 to 80 more homes were believed to have been devoured as the lava flow, measuring about half a mile wide and 10 to 15 feet (3-4.6 meters) tall, inundated the adjacent subdivisions of Kapoho Beach Lots and Vacationland.

The official said aerial surveillance of the area showed only the northern portion of Kapoho Beach and the southernmost “sliver” of Vacationland – the latter consisting of only about half a dozen homes – were left unscathed.

Civil defense spokeswoman Janet Snyder said later county tax records show the two subdivisions consist of 279 homes combined and that “many of those 279 homes are feared destroyed.” She said it would be some time before precise losses were confirmed. 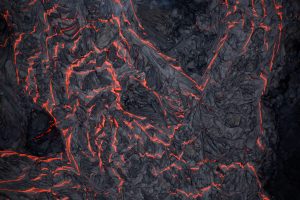 Lava flows on the outskirts of Pahoa during ongoing eruptions of the Kilauea Volcano in Hawaii, U.S., June 5, 2018. REUTERS/Terray Sylvester

Video footage from a helicopter showed two seaside homes engulfed in flames as clouds of white steam and hydrochloric acid fumes billowed from the water, where red-hot lava was pouring into the ocean.

Civil defense officials said Kapoho Bay itself had been filled in with lava that extended seven-tenths of a mile from what had been the shoreline.

“What used to be the bay is now all lava bed, new land, almost a mile out into the ocean,” the civil defense spokesman said.

Authorities began evacuating the greater Kapoho area last week and ushered most of the last remaining residents to safety early on Saturday, hours before the lava flow severed all road access to the region. Several holdouts were airlifted by helicopter on Sunday, leaving no more than a handful of people who refused to leave, officials said.

Barbara McDaniel, a retiree who moved with her husband to Vacationland from Washington state five years ago, said they fled as soon as evacuations began, taking little else but their dog and cat with them.

They worried their house would be spared by the lava but rendered inaccessible, leaving them stuck with the mortgage for an abandoned home and a fire insurance policy that was of no value, she told Reuters.

“Right now, I’m hoping that it burns down,” she said. “If lava takes it, we’re covered.”