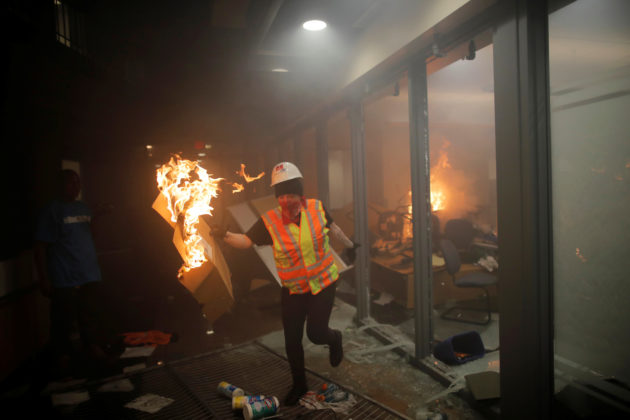 FILE PHOTO: Protesters are seen inside Minneapolis Police third precinct after setting fire to the entrance as demonstrations continue after a white police officer was caught on a bystander's video pressing his knee into the neck of African-American man George Floyd, who later died at a hospital, in Minneapolis, Minnesota, U.S., May 29, 2020. REUTERS/Carlos Barria

DENVER (Reuters) – A 22-year-old Minnesota man was charged on Tuesday with aiding and abetting the arson of a Minneapolis police station during protests over the death of a black man under a policeman’s knee, federal prosecutors said.

Dylan Robinson, who was arrested in Breckenridge, Colorado on Sunday, is accused of hurling a Molotov cocktail inside the Third Precinct police station in Minneapolis and igniting a fire in the building’s stairwell on May 28, according to the criminal complaint.

Robinson appeared in U.S. district court in Denver on Tuesday to hear the charges against him, the U.S. Attorney’s Office for the District of Minnesota said in a written statement. Prosecutors said he is from Brainerd, Minnesota.

Robinson is the second man arrested June 3 in connection to the blaze. Branden Wolfe, 23, was arrested in Minnesota and charged with one count of aiding and abetting arson, federal prosecutors said.

The police station was set on fire during demonstrations three days after George Floyd, 46, died when former Minneapolis police officer Derek Chauvin pressed a knee into his neck for nearly nine minutes.

The incident was captured by a bystander’s cell phone video and led to the firing of Chauvin, who was later charged with second-degree murder. Three other Minneapolis police officers were also charged in the case.

Authorities said they identified Robinson from social media posts and surveillance cameras. Agents with the Bureau of Alcohol, Tobacco and Firearms tracked him to Breckenridge, Colorado, a mountain town about 80 miles west of Denver, where he was taken into custody, according to an arrest warrant affidavit.

Robinson is due back in Denver federal court on Friday for a detention and removal hearing, a spokesman for the U.S. Attorney’s Office in Denver told Reuters.