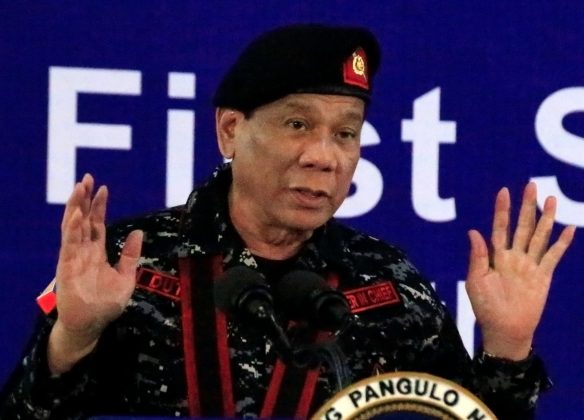 MANILA (Reuters) – Philippine President Rodrigo Duterte on Monday asked Congress to extend martial law on the southern island of Mindanao for a year, arguing that Islamist militants have been regrouping since a five-month urban conflict ended there in October.

He said fighters who survived the battle for Marawi City were determined to establish a Southeast Asian ‘wilayat’ – or governorate – for Islamic State and named militant Abu Turaifie as potentially the radical group’s next regional “emir”.

The previous “emir”, Isnilon Hapilon, and another rebel commander loyal to Islamic State were killed in October as the military closed in on fighters who had occupied the heart of Marawi since May 23.

In his letter to the Senate and House of Representatives, Duterte said militants were radicalizing and recruiting local people, reorganizing themselves and building their finances.

“These activities are geared towards the conduct of intensified atrocities and armed public uprisings,” he said, adding that they were aimed at establishing a global Islamic caliphate and a ‘wilayat’, not only in the Philippines but the whole of Southeast Asia.

A group led by Turaifie – who heads a splinter group of the Bangsamoro Islamic Freedom Fighters and, according to Duterte, is “said to be Hapilon’s potential successor” – was planning bombings in the Cotabato province south of Marawi.

Duterte placed restive Mindanao, which has a population of 22 million, under military rule after the attack on Marawi, and martial law was due to be lifted there on Dec. 31.

Lawmakers will vote on his request for a one-year extension at a joint session on Wednesday, Congress majority leader Rodolfo Farinas told reporters.

Continuing martial law beyond the initial 60-day limit requires lawmakers’ approval, but the constitution does not limit any extensions.

Duterte has long warned that Mindanao faced contamination by Islamic State, and experts say Muslim parts of the predominantly Catholic southern Philippines are fertile ground for expansion, due to their history of marginalization and neglect.

Critics of Duterte, who has held open the possibility of extending military rule to the whole country, have slammed the imposition of martial law in Mindanao as a misuse of power and evidence of the president’s authoritarian tendencies.

Martial law is a sensitive issue in the Philippines, bringing back memories of the 1970s rule of late dictator Ferdinand Marcos, who was accused of exaggerating security threats to justify harsh measures to suppress dissent.

Human rights group Karapatan questioned why martial law should be extended in Mindanao nearly two months after the military’s victory in Marawi City.

“This is a dangerous precedent that inches the entire country closer to a nationwide declaration of martial rule,” it said in a statement.