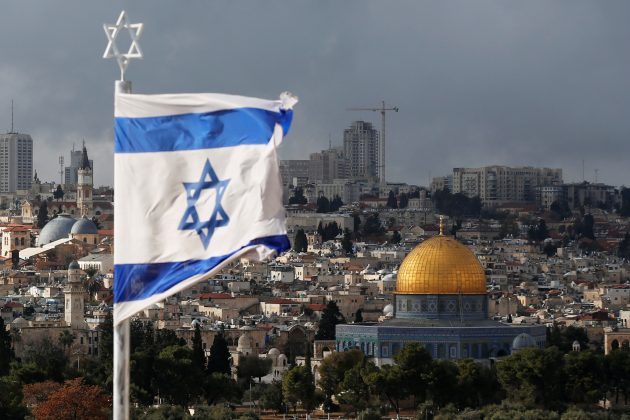 An Israeli flag is seen near the Dome of the Rock, located in Jerusalem's Old City on the compound known to Muslims as Noble Sanctuary and to Jews as Temple Mount December 6, 2017. REUTERS/Ammar Awad

DUBAI (Reuters) – A senior leader of al Qaeda’s Yemen branch has called for knife and car attacks on Jews in response to U.S. President Donald Trump’s decision to recognize Jerusalem as the capital of Israel, the U.S. SITE monitoring group said on Tuesday.

Citing a video recording by Al Qaeda in the Arabian Peninsula’s al-Malahem media foundation, SITE said that Khaled Batarfi, believed to be the number two man in AQAP after Qassim al-Raymi, also warned that no Muslim had the right to cede any part of Jerusalem.

“The Muslims inside the occupied land must kill every Jew, by running him over, or stabbing him, or by using against him any weapon, or by burning their homes,” Batarfi said in the 18-minute-long recording entitled “Our duty towards our Jerusalem”, according to SITE.

“Every Muslim must know that the Americans and the disbeliever West, and on top of them Britain and France, are the original reason behind the existence of the Jews in Palestine.”

Trump enraged Muslims last month when he announced that the United States recognizes Jerusalem as the capital of Israel and said he intends to transfer the U.S. embassy there.

U.S. Vice President Mike Pence, on a regional visit, said on Monday that the U.S. Embassy will be moved to Jerusalem from Tel Aviv before the end of 2019.

Batarfi was one of some 150 jailed AQAP members who were freed when the militant group, regarded by the United States as one of the deadliest branches of the network founded by Osama bin Laden, captured the Yemeni port city of Mukalla in 2015, where he was held.

Yemeni forces, baked by a Saudi-led coalition have since recaptured Mukalla and driven AQAP out, but Batarfi, who has since assumed a senior position in the group, remains at large.

AQAP has plotted to down U.S. airliners and claimed responsibility for 2015 attacks on the office of Charlie Hebdo magazine in Paris. AQAP also has boasted of the world’s most feared bomb makers, Ibrahim Hassan al-Asiri, and the Pentagon estimates it has between about 2,000 and 3,000 fighters.

Batarfi said Muslims in Western countries, including the United States, were obliged to target the interests of Jews and the Americans.

“They must be eager to prepare themselves as much as possible, and to carry out jihadi operations against them,” he added, according to SITE.

Palestinians seek East Jerusalem, including the walled Old City with its holy sites, as the capital of their own future state. Israel, which annexed East Jerusalem after capturing it in 1967 in a move not internationally recognized, regards all of the city as its “eternal and indivisible capital”.