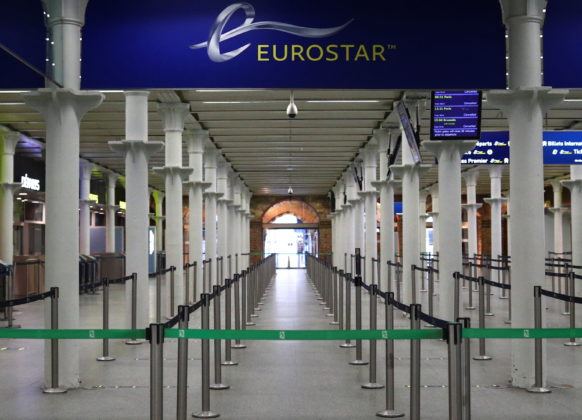 A view of an empty Eurostar terminal at St Pancras International, as EU countries impose a travel ban from the UK following the coronavirus disease (COVID-19) outbreak, in London, Britain, December 21, 2020. REUTERS/Hannah McKay

By Gerhard Mey and Ben Makori

DOVER, England (Reuters) – Several countries closed their borders to Britain on Monday over fears of a highly infectious new coronavirus strain, causing travel chaos and raising the prospect of food shortages just days before the UK is set to leave the European Union.

India, Pakistan, Poland, Spain, Switzerland, Sweden, Russia, Jordan and Hong Kong suspended travel for Britons after Prime Minister Boris Johnson warned a mutated variant of the virus, up to 70% more transmissible, had been identified in the country. Saudi Arabia, Kuwait and Oman closed their borders completely.

Several other nations blocked travel from Britain over the weekend, including France, Germany, Italy, the Netherlands, Austria, Ireland, Belgium and Canada – although experts said the strain may already be circulating in countries with less advanced detection methods than the United Kingdom.

The discovery of the new strain, just months before vaccines are expected to be widely available, sowed fresh panic in a pandemic that has killed about 1.7 million people worldwide and more than 67,000 in Britain.

New York Governor Andrew Cuomo urged the U.S. government to take steps to prevent the variant entering the country, which has been worst hit by COVID-19 with almost 318,000 deaths.

“It’s high time the federal government takes swift action, because today that variant is getting on a plane and landing in JFK, and all it takes is one person,” he said.

U.S. Assistant Health Secretary Brett Giroir said nothing had yet been decided on any travel ban. As the pandemic accelerates there, Congress was poised to vote on a $900 billion COVID-19 stimulus package, after months of inaction.

EU officials met via video link to coordinate their response to the new strain of the coronavirus. The bloc is on course to start COVID-19 vaccinations within a week after its medicines regulator approved the use of a shot from Pfizer and BioNTech on Monday.

Experts said there was no evidence that vaccines would not protect against this variant, but added they were working around the clock to determine whether the mutations would affect how well the shots guarded against infection.

“Since the three vaccine forerunners target the spike protein, how the variant responds to the vaccines and the protection that the vaccine will offer does still need to be examined in detail,” said Saad Shakir, a professor and director at Britain’s drug safety research unit.

France shut its border to arrivals of people and trucks from Britain, closing off one of the most important trade arteries with mainland Europe.

“No driver wants to deliver to the UK now, so the UK is going to see its freight supply dry up,” France’s FNTR national road-haulage federation said.

As families and truck drivers tried to navigate the travel bans to get back home in time for Christmas, British supermarket chain Sainsbury’s said shortages would start to appear within days if transport ties were not quickly restored.

“If nothing changes, we will start to see gaps over the coming days on lettuce, some salad leaves, cauliflowers, broccoli and citrus fruit – all of which are imported from the continent at this time of year,” Sainsbury’s said.

The global alarm was reflected in financial markets.

Wall Street also felt the pain, with losses across the board. The S&P 1500 airlines index slid 3%, while leading cruise operators fell about 4%.

The British pound tumbled 2.5% against the dollar at one point before paring some of the losses, while the yield on two-year UK government bonds hit a record low.

Johnson cancelled Christmas plans for millions of British people on Saturday due to the more infectious strain of the coronavirus, though he said there was no evidence that it was either more lethal or caused a more severe illness.

“Sick Man of Europe,” the Daily Mirror newspaper said on its front page beside a picture of Johnson, while the Sun newspaper said “French show no merci.”

The new variant and restrictions in Britain compound the chaos as the country prepares to finally part ways with the European Union, possibly without a trade deal, when the Brexit transition period at 2300 GMT on Dec. 31.

Talks on a Brexit trade deal were due to continue on Monday.

The new variant, which scientists said was 40%-70% more transmissible, is rapidly become the dominant strain in parts of southern England, including London.

Experts tracking the new strain said there was some early but unconfirmed evidence that it could transmit as readily among children as among adults, unlike previous dominant strains that appeared to be more easily able to infect adults.

Cases of the new strain have also been detected in some other countries, including Denmark, Italy and the Netherlands.

Australia said two people who travelled from the United Kingdom to New South Wales, its most populous state, were carrying the mutated virus. It axed dozens of domestic flights while New South Wales locked down more than 250,000 people.

“2020 is not done with us yet,” Prime Minister Scott Morrison said.

Some scientists said the prevalence discovered in Britain might be down to detection.

“Britain is simply the country which finds these mutations the most because they are looking for them more. There are countries that hardly search or do not search at all,” Marc Van Ranst, a virologist from the Rega Institute for Medical Research in Belgium, told broadcaster VRT.

“I think we will find in the coming days that a lot of other countries will find it.”