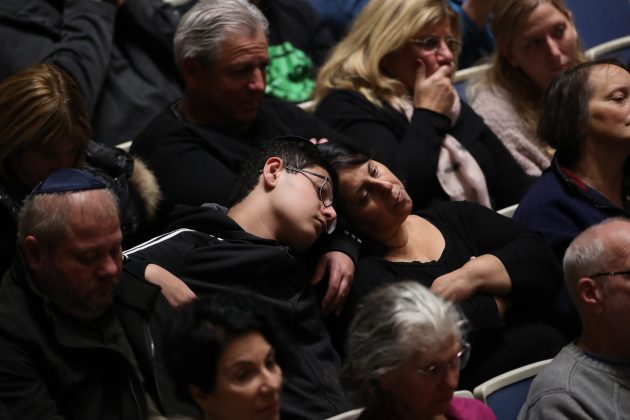 Mourners attend a memorial service at the Sailors and Soldiers Memorial Hall of the University of Pittsburgh, a day after 11 worshippers were shot dead at a Jewish synagogue in Pittsburgh, Pennsylvania, U.S., October 28, 2018. REUTERS/Cathal McNaughton

PITTSBURGH (Reuters) – The gunshots that tore through a Pittsburgh synagogue on Saturday first triggered lockdowns in houses of worship across the city. Then they brought forth an outpouring of unity and support.

Following the deadliest attack ever on the Jewish community in the United States, residents rushed to provide comfort, give blood, organize vigils and bring therapy dogs to a Jewish community center. 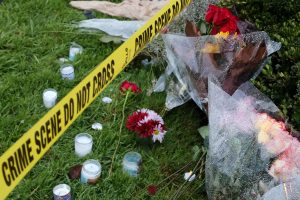 Flowers and candles are placed outside the Tree of Life synagogue following Saturday’s shooting at the synagogue in Pittsburgh, Pennsylvania, U.S., October 28, 2018. REUTERS/Aaron Josefczyk

The Tree of Life synagogue, where 11 people were killed by a gunman who burst into a morning service, is home to three congregations in Squirrel Hill, the heart of Pittsburgh’s tight-knit Jewish community.

Word of Saturday’s shooting spread quickly through the community. For some, the news arrived with text messages and phone calls. In corners of the community where cellphones were turned off during the Sabbath, it arrived nearly as quickly by word of mouth.

That was the case at the nearby Chabad congregation, where the service continued but with someone monitoring the door during what is traditionally an open event. One congregant, a chaplain, walked out to pray.

“Community is the greatest asset,” said Rabbi Yisroel Altein of Chabad. “Everybody being here for each other and looking to dispel the dark with the light.”

Erika Strassburger, who represents Tree of Life’s district on Pittsburgh’s City Council, said she was at a political gathering of about 30 people when she heard the news. The group put its plans to canvas the neighborhood for signatures on hold. 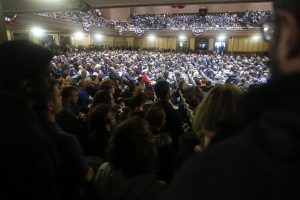 Mourners fill a memorial service at the Sailors and Soldiers Memorial Hall of the University of Pittsburgh, a day after 11 worshippers were shot dead at a synagogue in Pittsburgh, Pennsylvania, U.S., October 28, 2018. REUTERS/Cathal McNaughton

Squirrel Hill is known for inclusivity, the late television personality Fred Rogers who attended a church there, and for friendliness, residents said. It is a place where drivers use a “Pittsburgh Left,” yielding to oncoming traffic wanting to turn.

After the shooting, turnout at services across the city swelled. As soon as the Sabbath ended, members of Orthodox congregations and others who had been unable to attend the earlier vigil gathered. They stood outside of Tree of Life, or L’Simcha, and read psalms.

The following day, children attended traditional Sunday school classes at other congregations under the watch of neighborhood police. About 100 clergy, lay leaders and volunteers gathered at the Jewish Community Center to discuss how to move forward and make arrangements for many funerals at the same time. In Judaism, the dead traditionally need to be buried within 24 hours, so other congregations came forward to offer space. 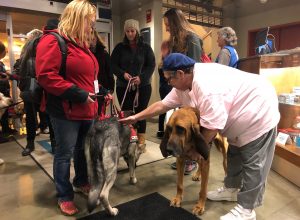 Therapy dogs from Pittsburgh and Youngstown arrive at the Jewish Community Center of Greater Pittsburgh to give comfort to volunteers, families, community members and employees following Saturday’s shooting at the Tree of Life synagogue in Pittsburgh, Pennsylvania, U.S., October 28, 2018. REUTERS/Jessica Resnick-Ault

After the meeting wrapped up, volunteers brought over a dozen therapy dogs to help console those in pain.

Carnegie Mellon University professor Bill Scherlis, who lives just a few blocks from the synagogue and has been to events there, went to a candlelight vigil nearby on Saturday night that was arranged by high school students and attended by hundreds of people.

When word of the shooting spread, Scherlis said, the streets became “quite suddenly” full of neighbors who came out to stand together arm in arm.

“The spirit is so strongly felt,” he said. “This community response is in sharp contrast to the horror of the events.”