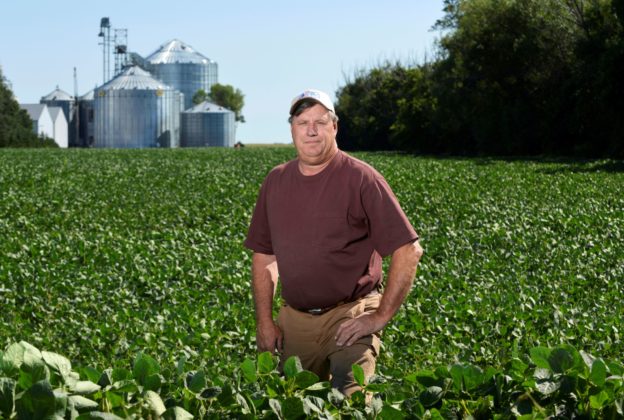 HAZELTON, N.D. (Reuters) – As the 2018 harvest approached, North Dakota farmer Mike Appert had a problem – too many soybeans and nowhere to put them. Selling was a bad option. Prices were near-decade lows as U.S. President Donald Trump’s trade war with China weighed heavily on the market. Temporary storage would only buy him a little bit of time, particularly in an area where cold weather can damage crops stored in plastic bags.

He sold half of the 456,000 bushels stored on his farm throughout the following summer, earning about $1 more per bushel and avoiding storage at nearby CHS elevators or an Archer Daniels Midland Co. processor in the area.

Roger Hadley, who farms 1,000 acres in Indiana, was unable to plant any corn and soybeans this year after heavy rains added to farmers’ woes.

He spent most of the summer trying to plant a combination of grasses, a so-called cover crop, so he could apply for government aid and try again next year.

“The guys that got rich are getting richer,” Hadley said. “It has frustrated a lot of guys.”

In farming, size does matter. The farms left standing after the trade war will likely be some of the biggest in the business. Appert’s operations are more than 100 times bigger than the average American farm and the advantages provided by that magnitude are becoming even more critical as the trade war stretches into a second year.

The declining number of U.S. farmers could hurt the world’s top grain merchants such as ADM and Bunge, who will have fewer suppliers. Additionally, farmers will have less need to rent space in the merchants’ grain silos as big farmers like Appert have plentiful storage on their own farms.

ADM said it would continue changing to meet the needs of its customers. Bunge did not respond to an email seeking comment.

And the biggest farmers are growing their operations even more as retiring farmers choose to lease their land rather than selling it.

When land becomes available for lease, only the biggest farmers can readily shoulder the costs needed to expand.

The size of the loans smaller farmers would need to buy equipment, for example, are too big for applicants with little collateral, said Dave Kusler, president of the Bank of Hazelton in Hazelton, North Dakota.

“It is almost impossible with what the costs are,” Kuslersaid. “In this area, you can’t make a living on 1,000 acres.”

Critics say the Trump administration’s policy of compensating growers for lost sales due to the trade war pays the bigger farm operations more since payments are calculated by acres farmed.

The Environmental Working Group, a conservation organization, said in a recent study the top 1% of aid recipients received an average of more than $180,000 while the bottom 80% were paid less than $5,000 in aid.

Appert said that big farmers receive bigger outright payments but less per acre than small farms because of a $500,000 cap per farm.

Doug Zink, who farms 35,000 acres near Carrington, North Dakota, said he likes to trade in his fleet of four combines and planters nearly every year to ensure that his equipment is under warranty, which saves thousands of dollars in maintenance costs and helps avoid breakdowns during key seeding and planting periods.

They also receive deep discounts – as much as $40,000 for some combine harvesters that can cost as much as $400,000 – allowing them to upgrade more often.

Manufacturers are increasingly willing to cut such deals to keep clients as the number of customers falls. Deere & Co <DE.N> said that it will reduce production by 20% at its facilities in Illinois and Iowa in the second of half of the year. Rival agricultural machine makers AGCO Corp <AGCO.N> and CNH Industrial <CNHI.N> have also slashed production to keep inventory in line with retail demand.

Large farms also have the easiest access to capital, with bankers still eager to provide loans to growers with plenty of collateral. “The ag trend is going to larger farms,” Kusler, the bank president in Hazelton, North Dakota, said, “The loans get much larger.”

Appert had no problem getting a loan to finance expansion.

“If you want to get a mortgage and buy a piece of land it is just boom, boom, boom,” he said.