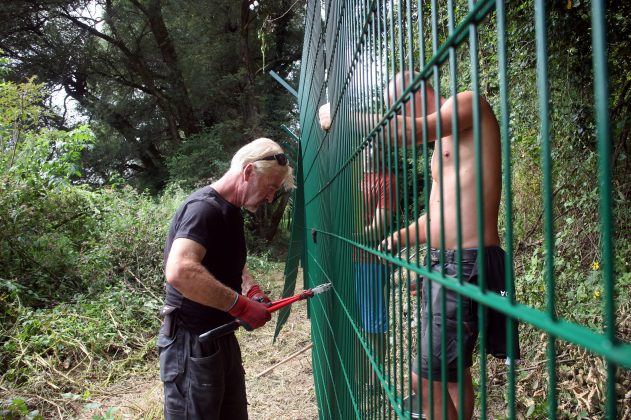 Workers installs a fence on the bank of the Kolpa river in Preloka, Slovenia, August 22, 2019. REUTERS/Srdjan Zivulovic

PRELOKA, Slovenia (Reuters) – Slovenia has begun work on an additional stretch of fence along its southern border with Croatia with which it aims to keep out a rising number of migrants entering the country illegally.

Slovenia’s police registered 7,415 illegal migrants in the first seven months of this year, a jump of 56% compared to the same period of 2018 as more people are trying to reach wealthy Western states via the Balkans.

“The fence will be erected temporarily in the areas where it is necessary to prevent illegal crossings of the state border and ensure the safety of people and their property,” said Irena Likar, a spokeswoman of the Interior Ministry.

A Reuters photographer near the village of Preloka in southern Slovenia saw construction work underway at the site.

Likar said the exact time plan and location of for the erection of the fence would not be made public.

Slovenia first began constructing a border fence during the refugee crisis of 2015 when in a period of six months about half a million illegal migrants passed through the country.

This new stretch of fence is around 2.5 meters high and is being erected on the banks of the river Kolpa which runs between Slovenia and Croatia.

The government’s immigration policy has met with little opposition in Slovenia, although some civil society groups are against the wire fence.

Most illegal migrants come from Pakistan, Algeria, Afghanistan, Morocco and Bangladesh. Only a fraction seek asylum in Slovenia, with most continuing on to neighboring Italy and Austria.