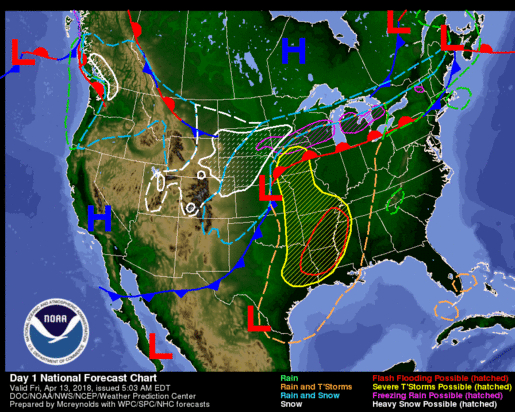 CHICAGO (Reuters) – A blizzard is expected to bring high winds and 12 inches (30 cm) of snow or more to parts of South Dakota and Nebraska on Friday and Saturday, an agricultural meteorologist said on Thursday.

The snowfall, along with cold temperatures in the wake of the storm, could delay the planting of corn and spring wheat in the Dakotas and Minnesota into May.

Nebraska and Minnesota were the No. 3 and 4 corn producers last year in the United States, the world’s top supplier of the feed grain, and South Dakota was No. 6. For spring wheat, North Dakota and Minnesota are the top two U.S. growers.

“In addition to adding on to the snow pack in the northern Plains, it’s also a persistently cold pattern going forward,” said Joel Widenor, meteorologist with the Commodity Weather Group, adding, “It’s going to make it tough to dry out the soil.”

The storm should dump 6 to 12 inches (15 to 30 cm) of snow across parts of South Dakota, Widenor said. The National Weather Service projected 12 to 18 inches across northern Nebraska and posted blizzard warnings for both states.

“At this point, it seems like it’s going to be out into May before we get our first chance at some warming,” Widenor said.

He noted that in a typical year, farmers in the Dakotas, Minnesota and Nebraska by mid-May are at least halfway finished with seeding corn and spring wheat.

Forecasting models indicated that another storm late next week could bring much-needed rain to the southern U.S. Plains winter wheat belt, although meteorologists were skeptical.

“The models definitely shifted wetter today versus where they have been the last couple days. But we are still very low confidence on that,” Widenor said.

The region’s hard red winter wheat has struggled with months of drought. The U.S. Department of Agriculture on Monday rated 30 percent of the overall U.S. winter wheat crop in good to excellent condition, compared with 32 percent the previous week and 53 percent a year ago.

Widenor said his firm’s current forecast called for about half of the Plains hard red winter wheat belt to receive 0.25 to 1 inch of rain from the storm arriving April 20, with the other half, including west Texas, western Oklahoma and southwest Kansas, missing out.