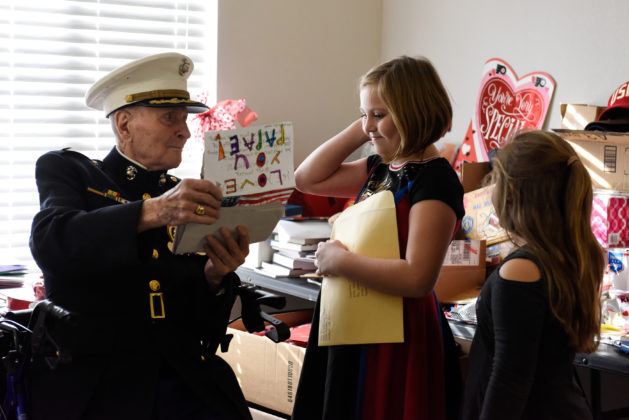 STOCKTON, Calif. (Reuters) – William White, a 104-year-old U.S. Marine veteran who earned a Purple Heart in World War Two, is celebrating Valentine’s Day this year like never before, surrounded by a mountain of 70,000 love letters and well-wishes sent from all over the world.

The cards and notes to “Major Bill,” a retired major who lives in an assisted living facility in Stockton, California, began pouring in after a fellow resident launched a social media campaign called “Operation Valentine,” asking friends and strangers alike to send greetings to honor White. 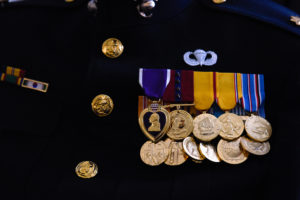 Major Bill White, a 104-year-old Marine veteran who fought and was injured in the World War Two battle for Iwo Jima, wearing dress blues featuring the Purple Heart at his home at an assisted living facility, where he is soliciting cards for Valentine’s Day in Stockton, California, U.S. January 31, 2020. Picture taken January 31, 2020. REUTERS/Kate Munsch

At the outset, the goal was a modest 100 cards – about one for every one of White’s birthdays – but the response has outstripped all expectations.

On a recent day, White’s great-granddaughter Abigail Sawyer, 9, delivered a bundle of cards from her fourth grade class, many of them decorated with the American flag.

A week before Valentine’s Day, which lands on Friday this year, at least 70,000 pieces of correspondence had arrived from people in every U.S. state and several foreign countries.

So much mail has been delivered that White’s family has had to enlist volunteers to help open the cards and read the warm wishes to White, who retired after 35 years of active service, including time in the Pacific theater of WWII, when he was wounded at Iwo Jima.

For those sending Valentines, White represents something bigger than himself. Many of them have conveyed a deep appreciation not only to White for his service, but to all veterans who died too soon to hear their gratitude.

A woman identified only as Jane told White that her late grandfather also fought in World War Two as a U.S. Army paratrooper. Had he lived, she said, he would be turning 100 years old this year.

“I miss him so much,” she wrote. “By sending you this card, I feel as though I am sending my grandfather a card.”

It’s all new to White, who said he never really celebrated Valentine’s Day, even when his wife of 42 years was alive.

“It’s something I’ve never heard of or seen,” White said. “All of a sudden here, like a ton of bricks. I’m sort of speechless.”