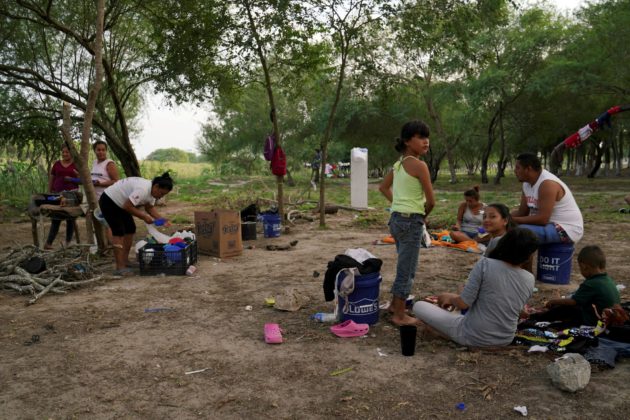 WASHINGTON (Reuters) – Roughly one in 10 migrants pushed back to Mexico to await U.S. court hearings under a Trump administration program have been caught crossing the border again, a top border official said on Thursday.

Acting U.S. Customs and Border Protection Commissioner Mark Morgan said during a White House briefing that migrants returned to Mexico under a program known as the Migrant Protection Protocols (MPP) have a 9% recidivism rate. Many of those migrants intend to seek asylum in the United States.

“Unfortunately, some of the individuals in the MPP program are actually going outside the shelter environment,” Morgan said. “They’re re-engaging with the cartels because they’re tired of waiting. And that’s when we’re hearing that some of that further abuse and exploitation is happening.”

Morgan said that around 50,000 people have been returned to Mexico under the program. Customs and Border Protection did not immediately respond to a request for more details on his comments.

The administration of Republican President Donald Trump launched the MPP program in January as part of a strategy to deter mostly Central American families from trekking to the U.S. border to seek asylum. Trump officials have argued the bulk of such claims for protection lack merit and that migrants are motivated by economic concerns.

Immigration advocates say asylum seekers sent to wait in Mexican border towns, for the weeks or months it takes for their cases to wind through backlogged immigration courts, face dangerous and possibly deadly conditions.

Migrants who claim fear of returning to Mexico can ask to stay in the United States for the duration of their court case. But just 1% of cases have been transferred out of the program, according to a Reuters analysis of federal immigration court data as of early October.

The administration has said the MPP program and other measures has helped lead to a decline in border arrests. In October, apprehensions along the U.S.-Mexico border fell for the fifth straight month, Morgan said.

The White House briefing followed a leadership change at the Homeland Security Department on Wednesday.

The Trump administration installed Chad Wolf, previously chief of staff to former Secretary Kirstjen Nielsen, as acting secretary. Wolf then announced that acting U.S. Citizenship and Immigration Services Director Ken Cuccinelli – an immigration hard liner – would be elevated to the No. 2 position at the department.