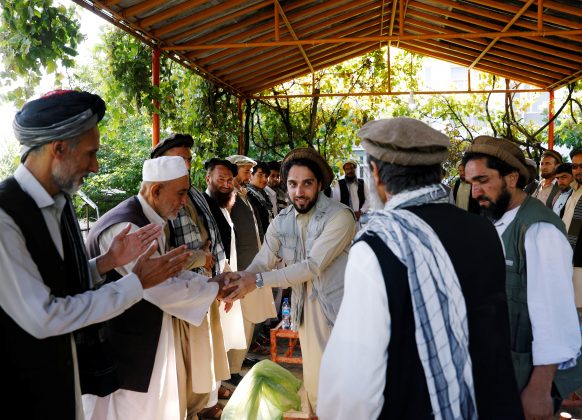 JANGALAK, Afghanistan (Reuters) – A “secretive” peace deal between United States and the Taliban could face wide resistance in Afghanistan if it opens the door to the insurgents’ hardline regime, said the son of Ahmad Shah Massoud, the slain hero of the anti-Soviet resistance.

Ahmad Massoud, who was 12 years old when his father was assassinated days before the Sept 11, 2001, attacks on the United States, is among several Afghan politicians critical of the accord reached with the Taliban this week.

While he is still relatively new to Afghan politics, the aura of his father’s name adds weight to his words in a country where the habits of dynastic politics remain deeply ingrained.

“It’s very secretive. It has happened behind closed doors,” Massoud told Reuters in an interview.

“We see the peace deal as a great opportunity but how it has been managed is unfortunately disappointing,” Massoud said. “We want to see clarity, we want to see people from all over the country involved in it.”

Speaking after some 10,000 supporters rallied at his father’s mausoleum in the Panjshir Valley on Thursday, Massoud’s comments reflect the deep suspicion many Afghans have of a deal reached without their involvement.

The accord would see thousands of U.S. troops withdrawn in exchange for Taliban promises not to let Afghanistan be used as a base for future attacks on the United States and its allies.

It is intended as a first step to a peace deal between the Taliban and wider Afghan society but it remains unclear what will happen next. The insurgents have refused to negotiate directly with the Afghan government, which they consider an illegitimate “puppet” regime and mistrust abounds.

Although details have not been made public, the fact that the accord appears to acknowledge the Taliban’s self-described status as the Islamic Emirate of Afghanistan has aroused particular anger.

Many Taliban officials have said the country’s constitutional status should revert to the Islamic Emirate, but opponents see the term as a direct challenge to the internationally recognized Islamic Republic of Afghanistan, the state formed after the fall of the Taliban in 2001.

“For us, the Islamic Republic of Afghanistan is our red line,” Massoud said, adding that any change to the country’s status could only come through a referendum.

Opposition to the deal has been deepened by the Taliban’s recent escalation of attacks, heightening fears that it may be impossible to reach a stable settlement once U.S. forces leave.

Many have worried about a fracture along ethnic and regional lines, with Persian-speaking Tajiks and Hazaras from the north and west against southern and eastern Pashtuns, the group that have supplied most of Afghanistan’s rulers and where the Taliban draw most support. Memories of the 1990s civil war are vivid.

“We do not want to see another war break out,” Massoud said. “This peace must end war all at once.”

The aggressive displays by supporters on the Sept. 9 anniversary of the death of Massoud’s father, when armed bands drive through the streets of Kabul firing into the air, have led many to suspect that the old Mujahideen Northern Alliance could reform to oppose the Taliban.

However, Massoud insists that only a political settlement will be effective and that only government forces should be armed.

“After the peace process, no political group … but the government should have guns,” he said.