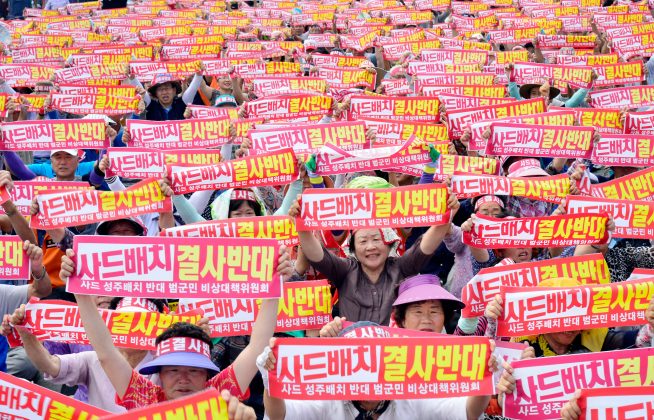 By Jack Kim and Ju-min Park

SEOUL (Reuters) – South Korea announced on Wednesday the site where a U.S. THAAD anti-missile defense unit will be deployed against North Korea’s missile and nuclear threats, a plan that has angered China and prompted a North Korean warning of retaliation.

South Korea and the United States said last Friday they had made a final decision to deploy the Terminal High Altitude Area Defence (THAAD) system in the South.

Tension on the Korean peninsula has been high since North Korea conducted its fourth nuclear test in January and followed that with a satellite launch and a string of test launches of various missiles.

The South Korean Defence Ministry said the THAAD system would be deployed in the southeastern county of Seongju to maximize its effectiveness while minimizing any impact on residents and the environment.

“By operating the U.S. THAAD battery in Seongju, we will be able to better protect one half to two-thirds of our citizens from North Korean nuclear and missile threats,” the ministry said in a statement.

“It will dramatically strengthen the military capabilities and readiness to defend critical national infrastructure such as nuclear power plants and oil storage facilities, as well as the military forces of the South Korea-U.S. alliance.”

North Korea’s military on Monday threatened to retaliate against the deployment of the system with a “physical response” once its location and time of installation were decided.

South Korea’s defense ministry has said it aims to have the system operational by the end of 2017.

The decision to deploy THAAD is the latest move to squeeze the increasingly isolated North Korea, but China worries the system’s radar will be able to track its military capabilities. Russia also opposes the deployment.

South Korea and the United States have said THAAD will only be used in defense against North Korean ballistic missiles, but China has warned it would destabilize the regional security balance.

THAAD is built by Lockheed Martin Corp &lt;LMT.N&gt; and designed to defend against short- and medium-range ballistic missiles by intercepting them high in the atmosphere, or outside it. The United States already has a THAAD system on the island of Guam.

Putting THAAD in Seongju would also allow for protection of major U.S. military installations in the South, while limiting the range of its radar’s reach into China, South Korean media said.

The United States has about 28,000 troops in South Korea. It will pay for the THAAD system.

But he added: “I don’t think there will be a major retaliatory action in terms of the economy.”

“China will resolutely take the necessary steps to protect our reasonable interests,” Lu added, without elaborating.

North Korea conducted its latest test of a submarine-launched ballistic missile a day after the announcement of the THAAD deployment, although it was seen as a failure. Earlier last week, the United States announced sanctions against North Korean leader Kim Jong Un over human rights abuses.

Recent media speculation about possible THAAD sites had fueled protests from residents, including those of Seongju.

The county’s commissioner has been on a hunger strike against the deployment, county official Kim Jee-hyun said.

A group of residents arrived at the Defence Ministry in Seoul on Wednesday to voice their opposition.

Members of parliament raised questions about the possible health impact of the system’s radar. The defense ministry had said it would choose a site that did not risk people’s health.

Seongju residents are also worried that the deployment could damage the reputation of their melon crop, which Kim said accounted for 70 percent of the country’s output.

“Our farmers are in despair,” she said.