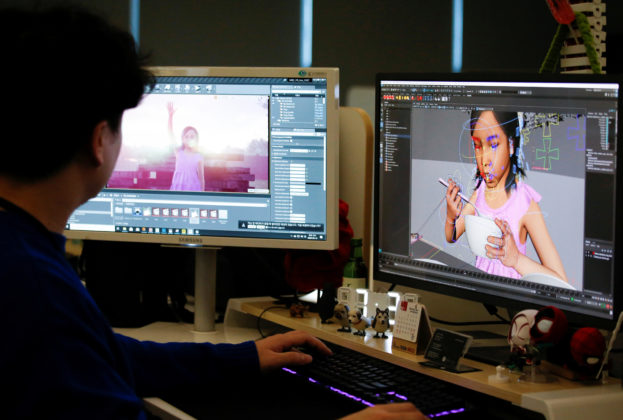 An employee works on a virtual reality animation at the office of Vive Studios in Seoul, South Korea, February 13, 2020. REUTERS/Heo Ran

SEOUL (Reuters) – Wearing virtual reality goggles, Jang Ji-sung burst into tears as her 7-year-old daughter, Na-yeon, emerged from behind piles of wood in a neighborhood park, her playground until she died from blood-related diseases three years ago.

“Mom, where have you been? Have you been thinking of me?” Na-yeon said, prompting a choked-up Jang to reply: “Always.”

“I really want to touch you just once,” Jang said, her voice and hands quivering. “I really missed you.”

The tearful reunion, aired last week in a documentary by South Korean broadcaster MBC, was made possible by virtual reality (VR) technology which embodied Na-yeon in a digital avatar modeled upon a child actor using photos and memories from her mother.

The documentary, entitled “Meeting You”, struck a chord with many South Koreans while highlighting the growing scope of the new technology beyond gaming.

“People would often think that technology is something that’s cold. We decided to participate to see if technology can comfort and warm your heart when it is used for people,” said Lee Hyun-suk, director of the Seoul-based VIVE Studios, who led the project.

Kim Jong-woo, who produced the documentary, said he focused on “remembering” Na-yeon instead of recreating her, so Jang and her family would feel as if her daughter had lived on.

For Jang, her last wish was to tell Na-yeon she loved her and has never forgotten her.

“It’s heartbreaking that her time has stopped at the age of 7,” Jang said, with a faint smile. “But I was so happy to see her that way.”