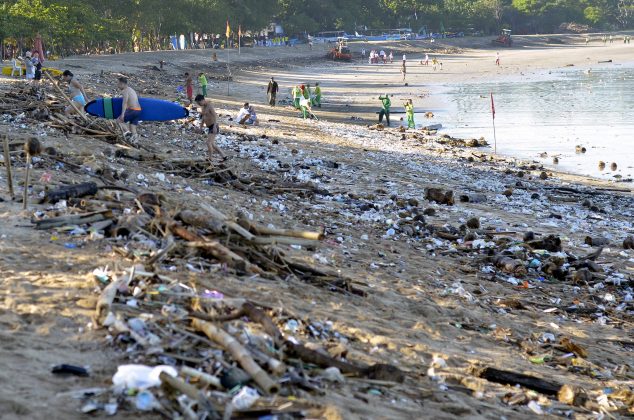 FILE PHOTO: Tourists walk amongst trash washed up on Kuta beach by seasonal winds, as workers attempt a clean-up in the background, on the Indonesian island of Bali February 15, 2016 in this photo taken by Antara Foto. REUTERS/Wira Suryantala/Antara Foto

SINGAPORE/BANGKOK (Reuters) – The six-month closure of the Philippine tourism island of Boracay for a revamp after the country’s president branded it a “cesspool” reflects the growing pressures on beach resorts across Southeast Asia as visitor numbers surge.

Airports have become chaotic, hotels are being thrown up hastily with little regard for safety and sanitation, tropical beaches are strewn with garbage and coral reefs are dying.

Thailand already has plans to shut its famous Maya Bay in the Phi Phi islands for four months this summer, while an environmental group is calling for urgent government action to tackle a “crisis” on the Indonesian tourist island of Bali.

“Many out-of-control destinations across Asia will need clean-ups,” said Brian King, associate dean of the School of Hotel and Tourism Management at Hong Kong Polytechnic University. “These may come from government, or industry or from NGO-driven community action. The danger is that little happens until the crisis point is reached.”

He added: “Boracay is not the first and won’t be the last closure.”

Airlines have already started to cut back flights to Boracay, which had 2 million visitors last year, with the largest foreign contingents coming from China and South Korea, ahead of its closure on April 26.

The Philippines, which had record visitor numbers last year after three years of double-digit growth, estimates the Boracay closure could reduce full-year GDP by 0.1 percent.

It is also planning to inspect the beach resort of Puerto Galera, on the island of Mindoro, and is already looking at the resorts of El Nido and Coron, in Palawan province, where an influx of tourism and rapid development has put infrastructure under strain.

But rival tourist hotspots around the region are not all rubbing their hands at the prospect of the extra revenue from the redirected tourist traffic.

Kanokkittika Kritwutikon, the head of the Tourism Authority of Thailand’s Phuket office, said the island was at “stretching point”, particularly its airport, which has undergone a number of upgrades in recent years to try to cope with overcapacity.

“Our policy is to try to spread tourism around” from Phuket to “secondary destinations that are less well-known,” said Kanokkittika. “Apart from guests arriving by plane to Phuket we also have boats coming in, including cruises, so you can imagine how many tourists come through Phuket.”

The shutdown of Maya Bay in an attempt to salvage the area’s coral reefs – which have been damaged by crowds of tourists and warmer temperatures – follows the closure of 10 popular Thai diving sites in 2016 after a National Parks survey found bleaching on up to 80 percent of some reefs.

Pattaya, south of Bangkok, serves as another cautionary tale.

An influx of western tourists from as far back as the 1960s, when American soldiers came on leave from the Vietnam war, and a construction boom in the 1990s transformed it from a picturesque fishing village to a town known for its seedy nightlife and high crime rate.

Thailand’s tourism ministry expects 37.55 million tourists this year, up from a record 35 million in 2017, of which 9.8 million were from China.

Benjamin Cassim, a tourism lecturer at Temasek Polytechnic School of Business in Singapore, said the closures of Boracay and Maya Beach could become “test cases” and will be closely monitored by other countries with popular beach resorts.

A non-profit group in Indonesia has been calling on the government to tackle what it calls an “environmental crisis” in Bali, the country’s most popular tourist island, which saw more than 5.5 million visitors last year.

Indonesian authorities have long faced criticism for allowing unplanned developments that have swallowed up rice fields with golf courses and villas on Bali. Its beaches are regularly strewn with plastic washed up from the ocean during certain months of the year.

Nonetheless, President Joko Widodo has been trying to promote creation of 10 “new Balis” in other parts of the scenic Indonesian archipelago.

“Environmental conditions in Bali are now increasingly degraded,” said I Made Juli Untung Pratama of WALHI, the Indonesian Forum for Environment.

Shutdowns such as the one on Boracay are not a new phenomenon. Back in 2004, Malaysian authorities shut all hotels on the island of Sipadan, known for having some of the best scuba diving in the world, to help protect its eco-system and subsequently restricted tourist numbers to the island.

But some say these extreme actions often come too late, and a more sustainable solution is needed across the region.