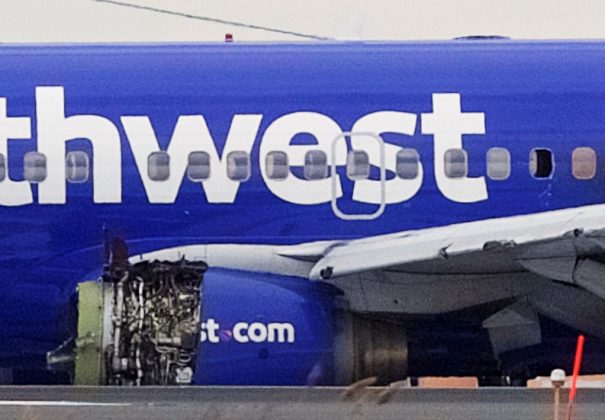 Emergency personnel monitor the damaged engine of Southwest Airlines Flight 1380, which diverted to Philadelphia International Airport after the engine blew apart and shattered a window, killing one passenger, on a runway in Philadelphia, Pennsylvania, April 17, 2018. REUTERS/Mark Makela

WASHINGTON (Reuters) – Southwest Airlines canceled more flights on Monday as it worked to complete inspections of engines like the one that failed last week in a deadly accident over Pennsylvania.

Flightaware.com, a website that tracks aviation cancellations, said Southwest canceled 129 flights on Monday, or 3 percent of its total flights, and delayed 468 other flights, or 11 percent. By contrast, other major U.S. carriers had each canceled four or fewer flights on Monday, the website said.

Southwest said the cancellations were the result of the company’s announcement last Tuesday that it would begin voluntarily stepping up inspections of some CFM56-7B engines over the next 30 days. The airline said on Sunday it canceled about 40 flights.

It said on Monday it anticipated “minimal delays or cancellations each day due to the inspections.”

The company added it “will continue our work to minimize flight disruptions by performing inspections overnight while aircraft are not flying, and utilizing spare aircraft, when available.”

Late on Monday, Representative Bill Shuster, chairman of the U.S. House Transportation Committee, introduced an amendment to a bill to reauthorize the Federal Aviation Administration that would require regulators to ensure airline engine safety and report to Congress.

The measure would bring airlines, manufacturers, regulators and others “together to share best practices and implement actions to address airline engine safety” and require a review of regulations, guidance, and directives related to airline engine operation. The House is expected to vote on a bill to reauthorize the FAA later this week.

The FAA and European regulators on Friday ordered emergency inspections within 20 days of nearly 700 aircraft engines similar to the one involved in the fatal Southwest engine blowout.

Southwest said the cancellations were not a result of the emergency directive.

The engine explosion on Southwest flight 1380 on Tuesday was caused by a fan blade that broke off, the FAA said. The blast shattered a window, killing a passenger, in the first U.S. airline passenger fatality since 2009. Southwest has declined to answer questions about its CFM56-7B inspection program, including how many engines were inspected before the accident, and if the engine that failed had been inspected and if the new inspections turned up any problems.

A Southwest flight in August 2016 made a safe emergency landing in Florida, after a fan blade separated from the same type of engine and debris ripped a hole above the left wing prompting two service bulletins from engine manufacturer CFM International, a joint venture of General Electric and France’s Safran .