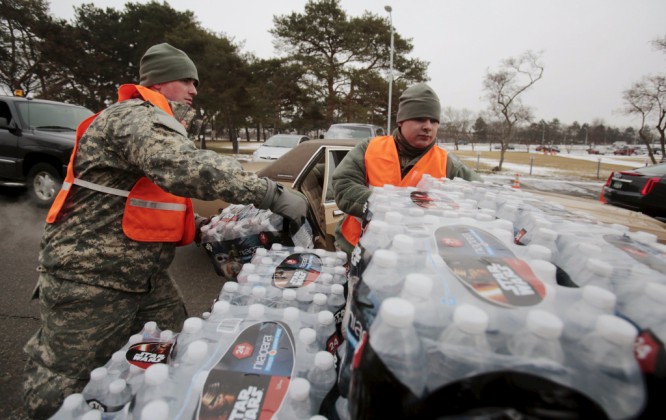 Michigan National Guard members help to distribute water to a line of residents in their cars in Flint, Michigan, on January 21, 2016. REUTERS / Rebecca Cook

(Reuters) – Michigan Attorney General Bill Schuette on Monday named a special prosecutor and investigator to look into possible crimes in the city of Flint’s water crisis.

Todd Flood, a former prosecutor for Detroit’s Wayne County, and retired Detroit FBI head Andrew Arena will conduct the independent investigation into the lead contamination in Flint after water supplies were switched to save money, Schuette said.

Governor Rick Snyder apologized last week for the delay in addressing Flint’s problems, which have become a national scandal. Residents of the city of 100,000 people had complained for months about discolored water, but officials moved slowly to address the problem.

“Without fear and without favor, this independent investigation will be high-performance and let the chips fall where they may,” Schuette told reporters at a news conference.

State Representative LaTanya Garrett, a Democrat from Detroit, filed a petition with U.S. Attorney General Loretta Lynch to remove Schuette and his team from the investigation, citing conflicts of interest. Schuette and Snyder are Republicans.

Schuette pledged the investigation would be independent and said an ethics lawyer would watch out for conflicts.

He gave no timeline for the probe, saying it could take a long time to get all the facts necessary.

Schuette said it was an outrage that people in Flint are billed for water they cannot drink and that he was looking for ways to get people relief from payments.

He said he decided earlier this year that the probe was needed, after the Michigan Department of Environmental Quality admitted errors in Flint water treatment.

Dan Wyant, the head of Michigan’s DEQ, resigned in December. Last week Susan Hedman, the regional director of the U.S. Environmental Protection Agency, also stepped down due to the Flint water problem.

In recent years, financially troubled Flint has been governed by a series of state-appointed emergency managers. A booming car industry town in the first half of the 20th century, the city has been in decline ever since.

In 2014, Flint began using river water, which was more corrosive than its previous supply and caused more lead to leach from its aging pipes.

This in turn led to elevated levels of lead, a neurotoxin that can damage the brain and cause other health problems, in some drinking water and in some children.

A number of lawsuits have been filed against city and state officials.