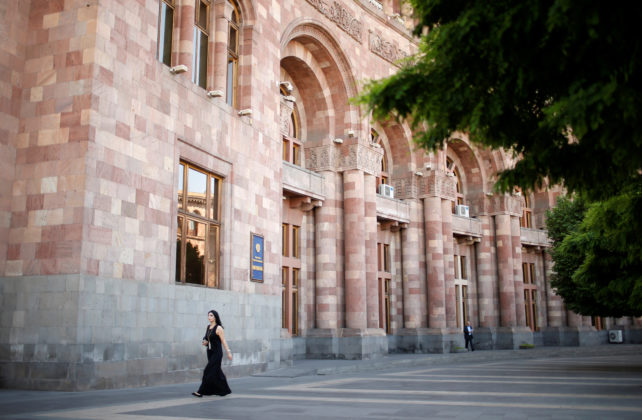 A woman walks in front of the government headquarters at the Republic square in Yerevan, Armenia, May 3, 2018. REUTERS/David Mdzinarishvili

By Nvard Hovhannisyan and Umberto Bacchi

YEREVAN/TBILISI (Thomson Reuters Foundation) – A probe into the suspected sale of dozens of Armenian babies to foreign families has left hundreds of women wondering what became of their own lost children in the biggest illegal adoption scandal to hit the former Soviet republic.

Police say a criminal ring tricked mothers out of their newborns in what is the latest smear on a lucrative international adoption market, with growing calls for a total shutdown to end similar abuses.

While the scale of the problem is hard to estimate, child protection experts say high adoption fees of up to $100,000 fan a black market that affects children from India to Uganda.

Anti-slavery groups consider illegal adoptions, when a child is brought to another country in breach of regulations or as a result of wrongdoing, a form of child trafficking.

The scandal in the Caucasus surfaced in November, when authorities revealed that more than 30 children had been sent to Italy for adoption between 2016 and 2018 after their mothers were pressured into giving them up.

Some women were coerced into giving birth despite wanting abortions, while others were wrongly told their newborns were ill, Armenia’s security services said in a statement.

Those charged deny any part in the scandal.

The probe, described by a United Nations expert as “very disturbing”, has pushed hundreds of Armenian mothers into a quest to find out what became of their own lost children.

“I am sure my baby is still alive,” said Haykuhi Khachatryan, who was told by the Yerevan clinic at the centre of the scandal that her third child was born dead in September.

“It’s not just my maternal instinct. There is nothing to prove otherwise,” she told the Thomson Reuters Foundation in a phone interview.

Investigating authorities told the Thomson Reuters Foundation that more than three dozen mothers worried their children might have been adopted without their approval have made contact since the illicit trade came to light.

Detectives are now checking all adoptions by foreigners since 1991, said Naira Harutyunyan, a spokeswoman for Armenia’s Investigative Committee, a law enforcement agency.

The U.N. Special Rapporteur on the sale of children, Maud de Boer-Buquicchio, who raised concerns about Armenian adoptions in 2015, said the scam should act as an urgent “wake-up call”.

“This looks like …there is a mafia treating children as commodities and making financial gain out of trading children. This is absolutely scandalous,” she told the Thomson Reuters Foundation in a phone interview.

“There is a real need for clarification and mothers are entitled to know what has happened to their children,” she said.

Inter-country adoption should be a measure of last resort for children who cannot be placed in foster care or adopted in their country of origin, according to the U.N.

“It is said that one of the reasons for inter-country adoption is poverty,” she said by phone.

“But with the thousands of euros that adoptive parents have to pay for a child…the original family could have been supported to raise their own child.”

In her 2015 visit to Armenia, De Boer-Buquicchio said she had witnessed children housed in orphanages because their parents lacked the money to raise them.

Some had their disabilities overstated to deter adoption locally, she said, but with no international agency in Armenia, foreign adoptive parents relied on unsupervised middlemen.

Mushegh Hovsepyan, assistant to the minister of social affairs, said the government was mulling reforms, emptying orphanages and strengthening the foster care system.

“We hope that in the near future we will be able to assert that the sale of children in Armenia is not possible or that the risks are reduced,” Hovsepyan said in a statement.

Armenia’s Investigative Committee said five people – including the heads of a private maternity clinic and a public orphanage – had been arrested as part of the probe.

The suspects face charges, including illegally separating a child from his or her parents, said Harutyunyan.

In at least two cases, adoptions followed payments of up to $20,000, she said.

Lawyers for the head of Yerevan’s Republican Maternity Hospital, Razmik Abrahamyan, and the director of Yerevan’s Children’s Home, Liana Karapetyan, said their clients denied the “unreasonable” and “groundless” accusations.

The Thomson Reuters Foundation was unable to contact representatives for the other three suspects, two of whom have not been named.

The health ministry said it could not comment on a probe involving a private hospital.

A Facebook group ‘Armenian Mothers’ set up by Khachatryan has organised protests demanding a thorough investigation.

The 33-year-old said she grew suspicious about the death of her child after medics repeatedly refused to show her a body and later requests to get a DNA sample were turned down.

Khachatryan’s lawyer, Susanna Sargsyan, said she had been contacted by the relatives of more than 600 children whose parents had been told were born dead or with serious illnesses.

Manya Hovhannisyan, 36, wants to find out whether one of her children had been sold off – and voiced hope that a new era of openness in the ex-Soviet republic might even elicit answers.

“Previously sharing this kind of a story would be like sharing the story with the wall, you would hear your echo back,” the woman said by phone from Germany where she now lives.

Hovhannisyan said she was told that her first child, a girl, had died days after a premature birth in 2010 but now doubted this was the case, as she was never shown a body.

“The most important thing for me is to know that (my child) is alive and lives somewhere.”