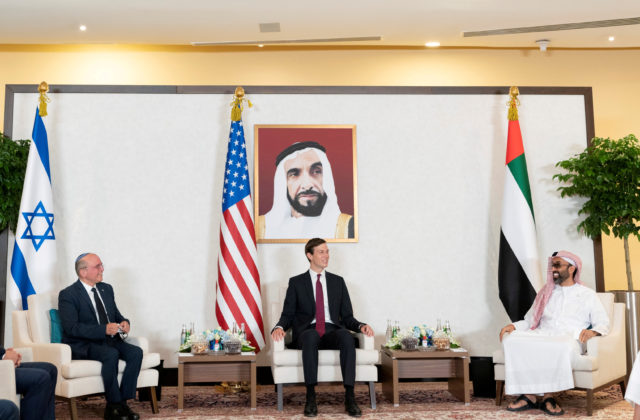 GAZA/ABU DHABI (Reuters) – A difference between English and Arabic versions of a trilateral statement after an historic flight from Israel to the UAE has been seized upon by Palestinians to suggest the Gulf state has overstated Israeli readiness to drop West Bank annexation plans.

The English version of a joint communique by the United Arab Emirates, Israel and the United States in Abu Dhabi on Monday said the accord had “led to the suspension of Israel’s plans to extend its sovereignty”.

But the Arabic version, carried by the UAE state news agency WAM, said “the agreement … has led to Israel’s plans to annex Palestinian lands being stopped”.

The discrepancy was highlighted by Palestinians after President Donald Trump’s son-in-law Jared Kushner flew with U.S. and Israeli delegations on the first Israeli commercial flight to the UAE to cement the normalization accord, the first by a Gulf state.

The UAE has portrayed the accord, announced by Trump on Aug. 13, as a means to halt Israeli annexation of occupied West Bank lands, where Palestinian hope to build a future state.

Jamal Al-Musharakh, chief of policy planning and international cooperation at the UAE foreign ministry, said the difference in wording was merely a translation issue.

“If anyone can think of a better synonym than ‘Eeqaf’ (stopping) for ‘suspending’, then please let me know,” he told reporters.

“One of the prerequisites of the commencing of bilateral relations was the halting of the annexation,” said Musharakh. The Emirati government did not respond when asked for further comment.

But Hanan Ashrawi, a senior PLO official, said it was a “forked tongue” attempt to influence public opinion in the Arab world.

“NO CHANGE IN MY PLAN”

“I don’t think it is a problem of translation, I think it is a disingenuous way of trying to manipulate the discourse,” she told Reuters.

“The Arabic translation is a way of misleading Arab public opinion by saying they have succeeded in stopping the annexation, while actually they suspended it.”

Speaking in Hebrew and using the biblical terms for the West Bank, Netanyahu told Israelis on Aug. 13 – the day the deal was announced: “There is no change in my plan to apply our sovereignty in Judea and Samaria, in full coordination with the United States. I am committed, it has not changed.”

Keeping annexation hopes alive is widely seen as Netanyahu’s attempt to placate his right-wing voter base. Settler leaders have accused him of repeatedly floating annexation, only to cave in to international pressure.

An Israeli Foreign Ministry spokeswoman on Wednesday said it had nothing to add to the original Aug 13. statement, which said: “As a result of this diplomatic breakthrough …Israel will suspend declaring sovereignty over areas outlined in the President’s Vision for Peace.”

The White House declined to comment on the UAE trip communique, but a U.S. source familiar with the matter said the White House was not responsible for the Arabic translation.

At the briefing to reporters in Washington after the Aug 13 announcement Trump said annexation was “right now off the table,” and U.S. Ambassador to Israel David Friedman added: “The word suspend was chosen carefully by all the parties. ‘Suspend’ by definition, look it up, means a temporary halt. It’s off the table now but it’s not off the table permanently.”

During his UAE trip this week Kushner also used the word “suspend”.

“Israel has agreed to suspend the annexation, to suspend applying Israeli law to those areas for the time being,” he told the WAM agency. “But in the future it is a discussion that I am sure will be had. But not in the near future.”