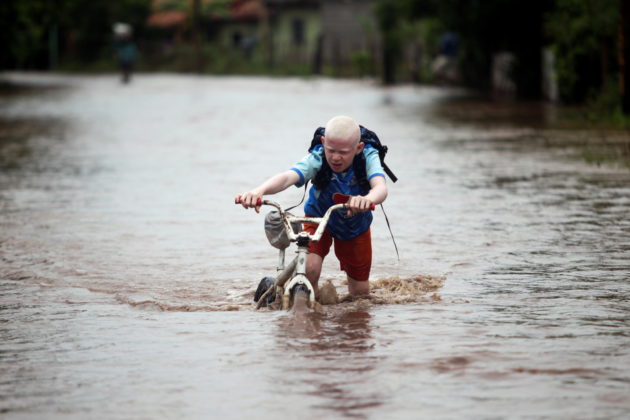 A child pushes his bicycle through a flooded road after the passing of Storm Iota, in Marcovia, Honduras November 18, 2020. REUTERS/Jorge Cabrera

PUERTO CABEZAS, Nicaragua (Reuters) – Storm Iota unleashed flash floods in areas already waterlogged with rain, forcing tens of thousands of people across Central America to flee their homes with a death toll feared to be over 20 by Wednesday morning.

The strongest storm on record ever to hit Nicaragua, Iota struck the coast late on Monday, bringing winds of nearly 155 miles per hour (249 kph) and inundating villages still reeling from the impact two weeks ago of Eta, another major hurricane.

Iota had largely dissipated over El Salvador by Wednesday morning, but authorities across Nicaragua and Honduras were still battling to cope with the devastating flooding the weather front had left behind in the deeply impoverished region.

Six people in Nicaragua and three others across Central America and the Caribbean had been confirmed dead by Tuesday evening.

Nicaraguan media said a landslide had killed at least 15 other people in the north of the country. Many more were still missing and feared lost, according to the reports.

In Honduras, more than 71,000 people are in shelters, and dozens of rivers and streams burst their banks, flooding nearby streets and highways, authorities said.

Despite the dissolution of Iota, the U.S. National Hurricane Center said the storm’s remnants could trigger life-threatening flash flooding, river flooding and mudslides across parts of Central America through Thursday.

Authorities in El Salvador have reported one death related to the storm so far, with hundreds more people in shelters.

The remnants of Iota were drifting west toward the Pacific by mid-morning on Wednesday, the Miami-based NHC said.