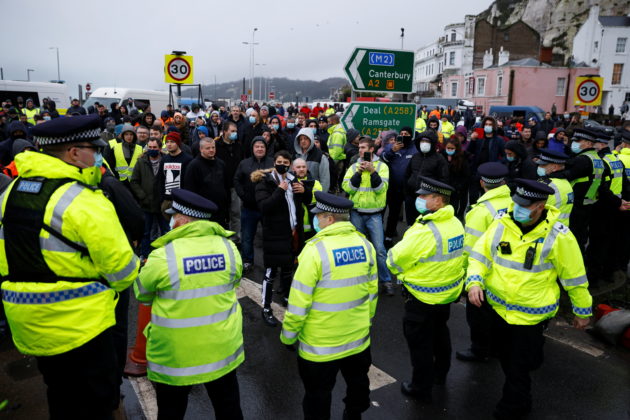 Drivers stand in front of police officers as they block the exit at the Port of Dover, as EU countries impose a travel ban from the UK following the coronavirus disease (COVID-19) outbreak, in Dover, Britain, December 23, 2020. REUTERS/John Sibley

By Peter Nicholls and Gerry Mey

DOVER, England (Reuters) – Furious truck drivers stranded at the English port of Dover scuffled with police as Britain sought to get cross-Channel traffic moving after a partial blockade by France to contain a highly infectious coronavirus variant.

Paris and London agreed late on Tuesday that drivers carrying a negative test result could board ferries for Calais from Wednesday after much of the world shut its borders to Britain to contain the new mutated variant.

The British government has drafted in the military to help but there was confusion amongst drivers about how to get tests, and warnings it would take time to clear the backlog of trucks, hammering Britain’s most important trade route for food just days before it leaves the European Union’s orbit.

“Testing has begun as we look to get traffic moving again between the UK and France,” British transport minister Grant Shapps said on Twitter. “However, French border police only acting on agreement from this morning and severe delays continue.”

Huge queues of trucks have been stacked on a motorway towards the Eurotunnel Channel Tunnel and on roads to Dover in the southeast county of Kent, while others have been parked up at the former nearby airport at Manston.

With no sign of traffic to the European mainland resuming and confusion over how to get a coronavirus test, tempers were beginning to flare among drivers, many from Eastern Europe who do not speak English and are angry that they will not be able to get home to their families before Christmas.

Police said there had been disturbances in Dover and Manston “involving individuals hoping to cross the Channel” and one arrest had been made.

“This is not how it should work. We have no information, the people need to be fetching information,” Mekki Coskun from Dortmund in Germany, told Reuters.

Poland’s Prime Minister Mateusz Morawiecki said he had been in touch with Britain’s Boris Johnson and French President Emmanuel Macron about the jam.

“This can be done differently. This whole process could’ve been better organized,” he said.

The Road Haulage Association, which estimated there were up to 10,000 trucks being held up in Kent, said it was chaotic.

“The border is still closed, the testing regime isn’t happening yet, you’ve got truckers very angry and we’re starting to see a breakdown in law and order in a small way among very frustrated guys who want to get back by Christmas,” Rod McKenzie, managing director of policy for the RHA, said.

Normally between 7,500-8,500 trucks travel via the port every day but volumes have reached more than 10,000 recently.

Getlink, the operator of the Channel Tunnel, said just 45 trucks had reached France between midnight and 1100 GMT.

Some of the extra traffic was a result of Christmas demand, but many were in the country to deliver goods to companies who are stockpiling parts before Britain finally leaves the EU on Dec. 31, a move that is expected to cause further disruption in January when a full customs border comes into force.

The British Retail Consortium, an industry lobby group, warned that until the backlog of trucks was cleared and supply chains returned to normal, there could be issues with the availability of some fresh goods.

Logistics firms have also said that many European drivers had already refused to come to Britain in the new year when they would have to carry customs paperwork, and the need to secure a coronavirus test will further compound the situation, pushing up freight prices.

Drivers will first take a rapid lateral flow test. Anyone who records a positive result will take a more comprehensive PCR test, which takes longer to secure a result, and anyone testing positive again will be given a hotel room to isolate.

Many of the mostly European drivers, many stranded with their trucks and without access to hot food or bathroom facilities, believe they are pawns in a political standoff between Britain and the EU as trade talks reach a climax.