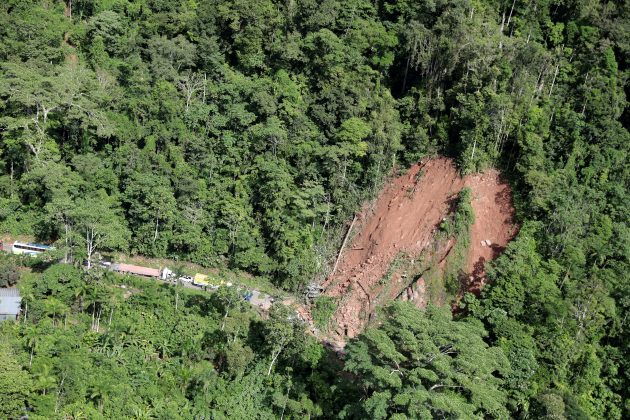 An aerial view shows a landslide caused by a quake in Yurimaguas, in the Amazon region, Peru May 26, 2019. REUTERS/Guadalupe Pardo

LIMA (Reuters) – A magnitude 8 earthquake killed one person, destroyed dozens of homes and disrupted some oil operations as it rocked Peru early on Sunday, authorities said.

The quake – the biggest to hit Peru since 2007 – was felt across the country and in neighboring Ecuador and Colombia after striking the sparsely-populated region of Loreto in Peru’s northern Amazon.

Peruvian President Martin Vizcarra said the hardest hit areas were the towns of Yurimaguas and Tarapoto.

“In reality, it’s affected all of the Peruvian jungle,” Vizcarra told journalists in broadcast comments as he surveyed the damage in Yurimaguas.

A 48-year-old man was killed in the region of Cajamarca after a boulder struck his home, emergency officials said. Peru’s National Emergency Center (COEN) said there were at least 11 people injured and more than 50 homes destroyed. Several schools, churches, hospitals and clinics were also damaged.

State-owned oil company Petroperu said the quake created a “minor” leak in a pipe at its Talara refinery on the Pacific coast that it said it has since controlled. It also suspended oil pumping at its Station 1 facility in Loreto in order to evaluate damage it detected there, it said in a statement. 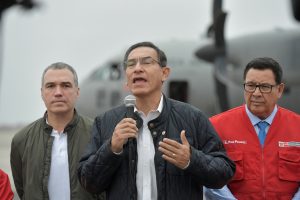 Peru’s President Martin Vizcarra accompanied by members of his cabinet speaks to the media before leaving for the area affected by earthquake, at the Jorge Chavez airport in Lima, Peru, May 26, 2019. Freddy Zarco/Courtesy of Bolivian Presidency/Handout via REUTERS

A spokeswoman for Canadian oil company Frontera Energy , which operates Peru’s largest oil block in of Loreto, said there were no damages to its installations.

TV images showed large fissures in a highway in Cajamarca and piles of mud and debris that had swept onto other roads.

Peru sits on the Pacific “Ring of Fire” where the majority of the world&rsquo;s seismic activity occurs.

The quake on Sunday was rated as one of “intermediate depth” at around 110 kilometers (68 miles). Intermediate depth quakes typically cause less surface damage than shallower tremors.

The earthquake was around 75 km SSE of Lagunas and 180 km east of the town of Moyobamba, the USGS said.

There were local reports of electric power cuts in the cities of Iquitos and Tarapoto, Amazonian towns in the Loreto region of the country. Pictures and videos online also showed some cracked and damaged walls, homes shaking and a collapsed bridge.

In neighboring Ecuador, the quake was strongest near the Amazonian region of Yantzaza, causing momentary power outages.