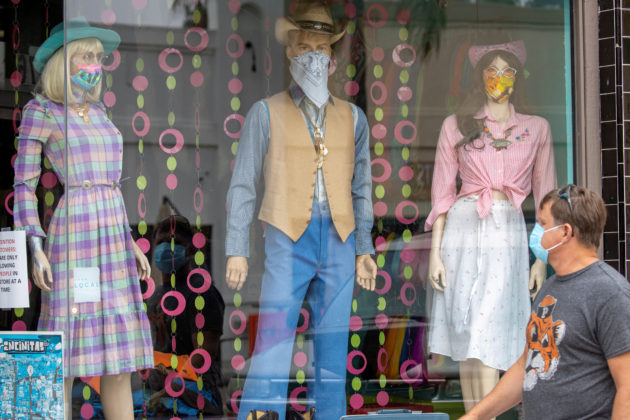 FILE PHOTO: A man wears a mask as he walks past mannequins wearing masks in a retail shopping area during the outbreak of the coronavirus disease (COVID-19) in Encinitas, California, U.S., July 30, 2020. REUTERS/Mike Blake/File Photo

(Reuters) – In an ordinary presidential election, Friday’s retail sales report would have been a dream for an incumbent like Republican President Donald Trump. Headline sales topped expectations by a wide margin and spending was up from August in all but one of the major categories.

Still, this is no ordinary election. Despite the gains seen in September, spending in key sectors that suffered massive job losses during the pandemic, such as restaurants and clothing stores, remain deeply below last year’s levels.

The report from the Commerce Department offered a reminder that millions of Americans are still out of work, leaving them with less money to spend on dinners out or new outfits. Without a vaccine or effective treatment, many consumers also hesitate to head out to stores or restaurants where they may be exposed to the virus.

On the one hand, the retail report showed that overall retail spending is now above pre-pandemic levels. That is a sign that some people may have spent the $300 supplement the federal government temporarily added to unemployment benefits. Other people may have boosted spending after being called back to work.

If more people continue to see their finances improve, that could bode well for the economy and for the overall outlook people carry when they vote in the Nov. 3 election.

But some economists are also questioning whether the increase in spending seen in September will continue with virus infections rising, job growth stalling and government aid fading.

Enhanced unemployment benefits and direct cash payments distributed as part of the CARES Act made it possible for jobless Americans to boost spending and pad their savings. But much of those savings were spent in August after the supplement to unemployment benefits expired, according to a study released Friday by the JPMorgan Chase Institute.

The White House and Congress have yet to reach a deal on another package. Job growth is also slowing and the number of Americans filing new claims for jobless benefits reached a two-month high last week.

“The progress we’ve made, which has been better than expected, may be slowing,” said John Briggs, head of strategy for the Americas at NatWest Markets. “I don’t know how much it hurts Trump’s chances, but I don’t see how it can help him.”