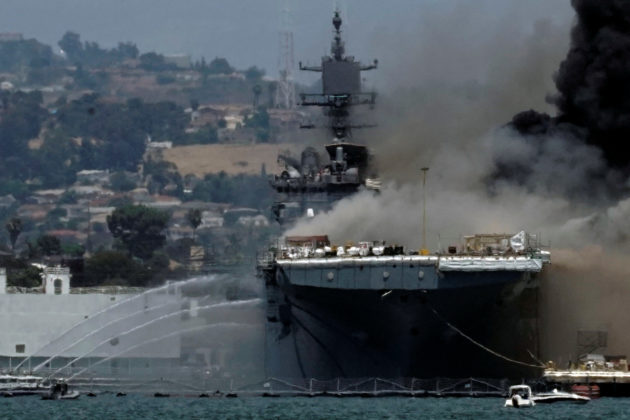 SAN DIEGO (Reuters) – Flames raged for hours on Sunday aboard a U.S. warship docked at Naval Base San Diego, sending 21 people to the hospital with minor injuries and prompting a relocation of two other Navy vessels moored nearby, military and local fire officials said.

The San Diego Fire-Rescue Department reported an explosion in conjunction with the blaze, which broke out at about 8:30 a.m. local time (1530 GMT) aboard the USS Bonhomme Richard, an amphibious assault vessel in port for routine maintenance.

The blast was believed to have been triggered by the rapid initial release of heat from a confined space under pressure, as opposed to an explosion of fuel or ordnance, Rear Admiral Philip Sobeck told a news conference on Sunday evening.

While the precise source of the blaze was unknown, the fire originated in a lower cargo hold of the ship and spread into the decks above it, consuming materials that typically burn in an office or apartment fire, Sobeck said.

Ammunition normally carried aboard warships at sea had already been unloaded as a standard safety precaution before the vessel was placed into maintenance, Navy officials said.

Roughly 1 million gallons of fuel remained isolated “well below where any heat source is,” and fire crews worked all day to “make sure that’s not affected,” the admiral said.

Palls of thick, acrid smoke visible for miles around the base engulfed much of the 844-foot (257 meter) warship for several hours, as about half a dozen firefighting boats in the harbor trained streams of water onto the burning vessel.

Seventeen sailors and four civilians were taken to local hospitals for treatment of non-life-threatening injuries, and all those who were aboard the warship – about 160 personnel – were accounted for, the Navy said in a statement.

Two guided-missile destroyers docked nearby, the USS Fitzgerald and USS Russell, were moved to piers farther from the burning vessel early in the afternoon, the Navy said. Smoke from the fire appeared to begin dying around 3 p.m. local time.

The Bonhomme Richard, commissioned in 1998, is designed to carry U.S. Marine Corps attack helicopters and ground troops into battle. As a Wasp-class amphibious assault ship, it ranks as the second-largest vessel type in the Navy’s fleet, surpassed only by aircraft carriers, and is one of only four of its kind in the Pacific, Raney said.

The stricken vessel has participated in several military operations and has appeared in a pair of Hollywood films – the 2012 sci-fi action movie “Battleship” and “Act of Valor,” which featured active-duty U.S. Navy SEALs, according to San Diego television station KGTV, an ABC News affiliate.

The ship was named in honor of Benjamin Franklin, one of America’s founding fathers and author of the influential “Poor Richard’s Almanack,” which he wrote under the pseudonym Poor Richard or Richard Saunders. It became a forerunner of the popular “Old Farmer’s Almanac.”

U.S. Revolutionary War naval hero John Paul Jones originally gave the name to a frigate the French donated to America in 1779 during its war of independence from Britain.