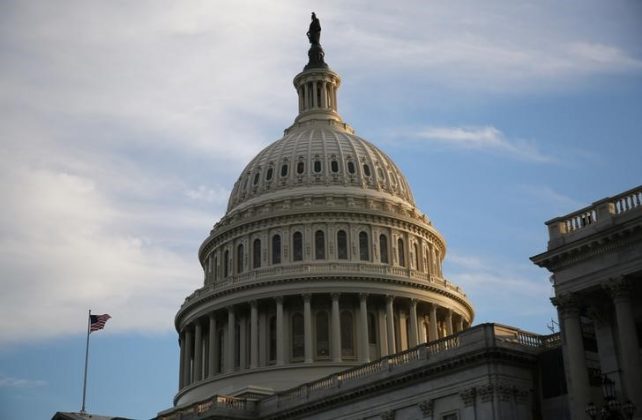 The U.S. Capitol building is seen at sunset in Washington, U.S. May 17, 2017. REUTERS/Zach Gibson

WASHINGTON (Reuters) – Hurricane Harvey devastated Texas, but could bring some fiscal order to Washington where Republicans and Democrats will need to put political differences aside in order to approve spending to repair the damage from flooding in and around Houston.

Lawmakers returning to Washington after a month-long break are expected to swiftly agree to an initial request for nearly $8 billion in disaster aid, with the House of Representatives considering assistance on Wednesday.

More requests will follow from the Trump administration, with the fractious Republicans who control the House and the Senate determined to look capable of governing in a crisis.

Some estimates say Harvey could cost U.S. taxpayers almost as much as the total federal aid outlay of more than $110 billion for 2005’s record-setting Hurricane Katrina.

That sobering cost and the urgent needs of Harvey’s victims have helped to calm a fiscal storm that had threatened to engulf Congress and President Donald Trump ahead of Oct. 1. The rancor revolves around the deadline for lawmakers to approve a temporary spending measure to keep the government from shutting down, as well as the need to raise the nation’s debt ceiling.

“There’s reason to hope that in the wake of the tragedy in Texas … there will be a renewed sense of community and common purpose that can help get things done,” said Michael Steel, a Republican strategist who once worked as spokesman for former House Speaker John Boehner.

Before Harvey, Trump had threatened to veto such spending and trigger a shutdown if Congress refused to fund his proposed U.S.-Mexico border wall. He has dropped his threat, the Washington Post reported on Friday, making a shutdown less likely.

As of the Labor Day holiday weekend, approval by Congress was widely anticipated in late September of a stopgap bill, or continuing resolution, to continue current spending levels for two to three more months.

The need to help Hurricane Harvey victims “creates another reason as to why you’d want to keep the government open,” Republican Senator Roy Blunt said on NBC’s “Meet the Press” Sunday.

With much of Washington distracted by tensions with North Korea over its nuclear program, Congress must also raise the federal debt ceiling by the end of September or early October to stave off an unprecedented U.S. government debt default, which would shake global markets.

The debt ceiling caps how much money the U.S. government can borrow, and some conservatives are loath to raise it without spending reforms. U.S. Treasury Secretary Steven Mnuchin on Sunday said Congress should act quickly to increase the debt limit, otherwise relief funding for hurricane-ravaged areas of Texas might be delayed.

“Without raising the debt limit, I am not comfortable that we will get money to Texas this month to rebuild,” Mnuchin said on Fox News Sunday.

Blunt, a junior member of Senate Republican leadership, said it was possible lawmakers could tie legislation raising the debt ceiling to measures providing financial aid for recovery from Harvey. “That’s one way to do it,” he said on Meet the Press.

The head of the Republican Study Committee, the largest group of House conservatives, said on Monday that Congress was obligated to help those hurt by Harvey.

But Representative Mark Walker also warned that “legislative games” like attaching Harvey aid to a debt ceiling hike could jeopardize consensus. “The debt ceiling should be paired with significant fiscal and structural reforms,” he said in a statement.

Senior Republicans were warning Trump not to anger Democrats by carrying through with his threat to curtail the Deferred Action for Childhood Arrivals (DACA) program for immigrant children, which Democrats widely support. Democratic votes will likely be needed to both raise the debt ceiling and prevent a shutdown.

Trump might have listened to them. Sources said on Sunday that he has decided to scrap the program that shields the young immigrants from deportation, but he will give Congress six months to craft a bill to replace it.

With his tendency to send conflicting policy signals and attack fellow Republicans, Trump may present the biggest uncertainty as Congress gets back to work.

The four top Republican and Democratic leaders of the Senate and House are set to hold a rare bipartisan meeting with Trump on Wednesday to chart a path forward for the multiple fiscal issues.

Senate Republican leader Mitch McConnell, who will attend the meetings, spent much of August feuding with Trump, who attacked the Kentuckian repeatedly on Twitter.

One Republican strategist said the Senate leader would not dwell on those tensions. “Basically every Republican senator is looking to put whatever nonsense happened on Twitter in August in the rear view mirror and focus on all the important work that needs to get done in September,” said Josh Holmes, a former chief of staff and campaign manager for McConnell.