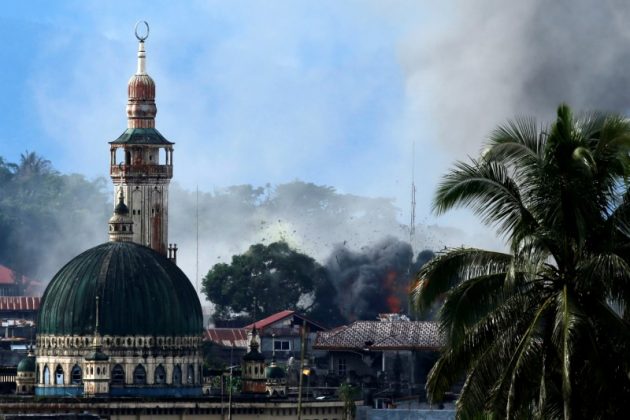 An explosion is seen following an airstrike. REUTERS/Jorge Silva

MARAWI CITY, Philippines (Reuters) – Saripada Pacasum Jr. gagged and turned away the first time he came across a decomposing body in Marawi City, where hundreds have died since Islamic State-inspired fighters attempted to overrun the southern Philippines town six weeks ago.

But the rescue and recovery volunteer had no time to waste as gunfire rang out from government troop positions and militant snipers around him: he put on a pair of rubber gloves and helped carry the remains out of the conflict zone in a pick-up truck.

“I thought of resigning after that,” Pacasum, who works in a disaster relief office told Reuters. “I was scared and not prepared for this kind of job.” 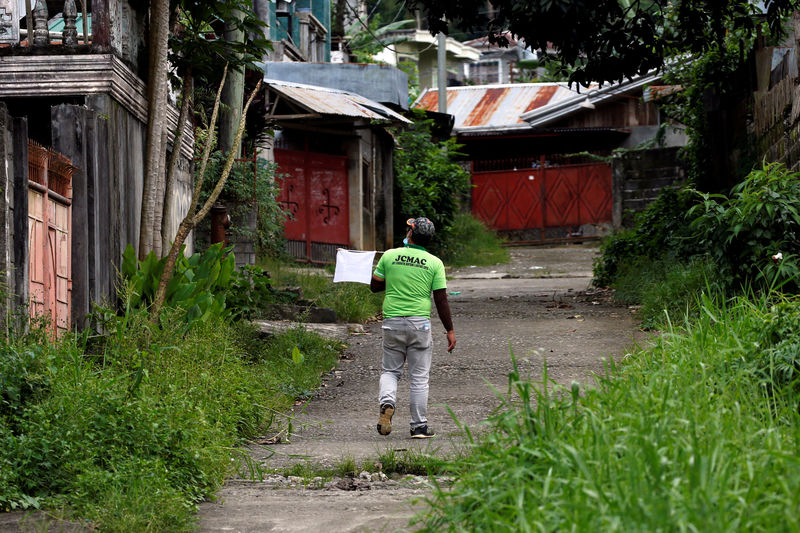 FILE PHOTO: A member of a humanitarian volunteers team walks with a white flag as he searches for survirvors or victims due to the fighting in the center of Marawi City, Philippines June 25, 2017. REUTERS/Jorge Silva/File Photo

But Pacasum, 39, continued to lead a team of about 30 young men and women who make near-daily forays to rescue civilians and retrieve victims in an urban battlefield that is infested with rebel snipers and battered by air strikes.

They have come to be known as the “white helmets” or “suicide squad” because of the risks they take when going in unarmed and wearing little protection other than white plastic construction helmets.

More than 460 people have been killed since the battle for Marawi began on May 23, including 82 members of the security forces and 44 civilians.

The military believes hundreds of civilians are still trapped by the conflict, the biggest internal security threat the Philippines has faced in decades and a shock to neighboring countries worried that Islamic State is trying to establish a foothold in Southeast Asia.

Fishermen, farmers, students, and small business owners, mostly from Marawi, are among those who have volunteered for rescue missions.

“We all grew up in Marawi and it breaks our hearts when we hear that Marawi is under siege,” said Abdul Azis Lomondot Jr., a 25-year-old university student, speaking in the team’s one-room office in the town’s capitol complex where many of the “white helmets” grab some sleep.

When the team gets a call from a trapped civilian or their evacuated relative, they first try to determine their location. Team leader Pacasum then asks for volunteers.

“We grab our helmets, IDs, a ladder, some small tools and we are good to go,” said Lomondot.

One such mission around three weeks into the siege almost went awry when the team drove into the conflict area in pick-up trucks but could not immediately find the house where four elderly people were known to be trapped.

“In that moment, I was panicking because I thought this may be an ambush,” Pacasum said as he and Lamondot recalled the mission. “We were just waiting for the sound of gunshots.”

After driving around for 20 minutes, the team finally located the house, but was shot at as they drove out with the civilians on board. 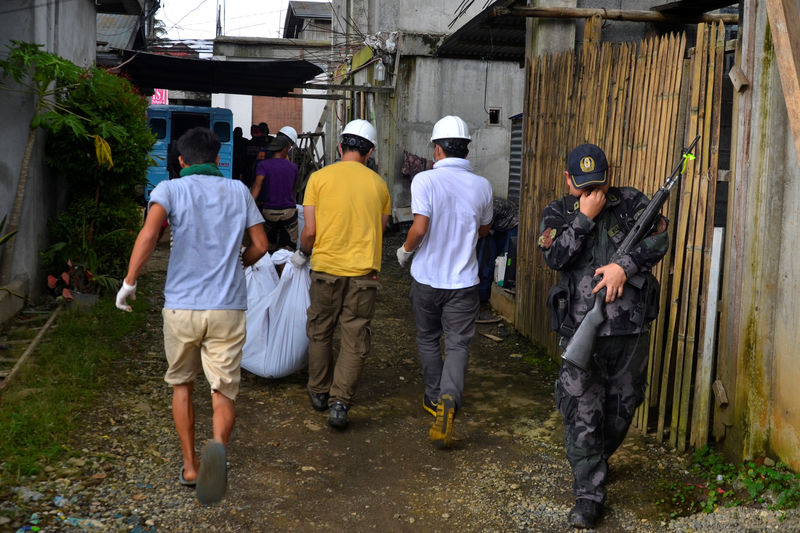 A group of rescue volunteers carry a body they found at the beginning of the fight between government troops and Maute group militants in Marawi, Philippines May 28, 2017. Picture taken May 28, 2017. Lanao del Sur Provincial Disaster Risk Reduction and Management Office/Handout via REUTERS

As the siege drags on and the government pours troops into the lakeside town, soldiers have started providing cover for some of the rescue teams’ missions. Pacasum says that while this has obvious advantages, it can also mean they are more likely to be targeted by the militants.

The team has also received counseling and equipment from the International Committee of the Red Cross (ICRC), and training on how to properly handle cadavers.

Pacasum, who has led more 10 rescue missions, wants to see the battle through to the end, but will consider changing professions when it’s over.

“It’s too stressful, he said.

“Some of the volunteers … they are just young kids, they are very aggressive. I’m more cautious. I have kids and I want to watch them grow old.”