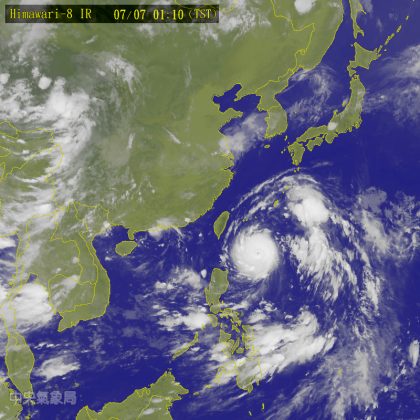 Until now the northwest Pacific has enjoyed the longest extended streak on record almost 200 days without a named storm.  But today, the first super typhoon of 2016 is set to hit Taiwan and China Thursday night into Friday, according to The Weather Channel.

Considered a Category 5 equivalent tropical cyclone, with sustained winds at times of 175 mph, forecasters predict this to be the strongest Super Typhoon since Typhoon Soudelor in August of 2015. Soudelor  caused massive rains of up to 50 inches in the mountains, 3.6 million homes with no power, massive flooding, and mudslides. There were 40 confirmed deaths and hundreds injured.

According to local reports, Taiwan’s Minister of Transportation and Communications Hochen Tan was confident that Taiwan’s international airport would avoid flooding due to management having all water channels cleared of stones and dirt and water pumps ready.  Sandbags have also been placed.  Food prices have risen in anticipation of this dangerous storm.

USA Today reports that, Nepartak has seen gusts of up to 207 mph.  Taiwan’s military has mobilized thousands of troops and Premier Lin Chuan was briefed by emergency officials Wednesday morning.

A hurricane and typhoon are the same kinds of storms. West of the International Date Line these storms are called typhoons. A Super Typhoon is a storm where the sustained winds reach 150 mph.

For Taiwan, although the incredibly intense winds are dangerous, the concern for the public is mainly for flash flooding and mudslides which will threaten the most lives.