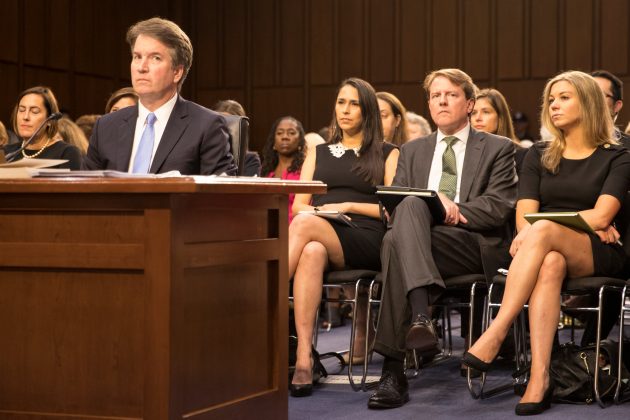 By Lawrence Hurley and Amanda Becker

WASHINGTON (Reuters) – U.S. Supreme Court nominee Brett Kavanaugh stressed on Thursday that he believes the judiciary has broad authority to check the power of the White House, but refused to criticize the man who selected him, President Donald Trump.

In a second day of testimony, Kavanaugh declined to comment on Trump’s criticism of the judiciary or offer praise of the president’s character.

Democrats at Kavanaugh’s Senate confirmation hearing also pressed the conservative federal appeals court judge over newly released emails highlighting his views on abortion and racial issues after a partisan fight over the public release of the documents.

The documents released on Thursday dated from Kavanaugh’s service in the White House under Republican President George W. Bush more than a decade ago. Democrats had objected to an earlier decision by the Senate Judiciary Committee’s Republican leadership not to make the emails public.

The third day of the confirmation hearing again was repeatedly interrupted by protesters hostile to Kavanaugh. The nominee, enduring back-to-back days of lengthy questioning, remained in good humor, making no gaffes that were likely to derail his confirmation in a Senate narrowly controlled by Trump’s fellow Republicans, despite the efforts of Democrats opposed to him.

Some liberals have expressed concern Kavanaugh could be a rubber stamp for Trump and protect him from lawsuits and investigations.

Asked by Democratic Senator Cory Booker whether he was picked because of an expectation of loyalty to Trump, Kavanaugh responded: “My only loyalty is to the Constitution. I’m an independent judge.”

Kavanaugh refused to say whether he had “the greatest respect” for Trump, a phrase Booker said he had used when describing Bush.

Democratic Senator Dick Durbin said Kavanaugh’s nomination comes at a time when Trump poses a threat to America’s rule of law and is facing an ongoing special counsel investigation. Kavanaugh said his 12 years as a judge demonstrated he was unafraid “to invalidate executive power when it violates the law.”

Kavanaugh had declined on Wednesday to answer whether a president would have to respond to a court’s subpoena, saying he could be asked to rule on the matter. But under questioning by Durbin on the scope of presidential power, Kavanaugh underscored judicial authority.

“When a court order requires a president to do something or prohibits a president from doing something under the Constitution or laws of the United States, under our constitutional system, that is the final word,” Kavanaugh said.

Kavanaugh, probed again on his views on a 1974 Supreme Court ruling against President Richard Nixon requiring recordings made in the Oval Office to be given to prosecutors, said the case was correctly decided. He called it “a moment of judicial independence where I think the court came together” in a unanimous decision.

Kavanaugh declined to answer questions on how that case could be applied relating to the investigation by Special Counsel Robert Mueller into potential collusion between Trump’s 2016 presidential campaign and Russia.

He also repeated his refusal to comment on whether he would recuse himself if a case involving the Mueller investigation or other issues relating to Trump’s conduct came before him.

If confirmed, Kavanaugh is seen as likely to tilt the top U.S. court even further to the right. That prospect worries Democrats and heartens Republicans on volatile issues including abortion, gun rights, gay rights, the death penalty, religious liberty and business regulation.

The committee considering Kavanaugh’s nomination will hear from outside witnesses on Friday before the hearing wraps up. Republicans hope the full Senate can vote on the nomination close to the time the Supreme Court’s new term starts on Oct 1.

In a 2003 email released on Thursday, Kavanaugh suggested striking a line from a draft opinion piece that had stated: “It is widely accepted by legal scholars across the board that Roe v. Wade and its progeny are the settled law of the land,” saying that the Supreme Court could overturn it.

Asked about that document, Kavanaugh said he suggested the change because he thought the draft language was overstating the thinking of legal scholars at the time. He again declined to say whether the landmark 1973 ruling that legalized abortion nationwide, Roe v. Wade, was correctly decided, although he indicated – as he did on Wednesday – that it was a decision that merited respect as “an important precedent of the Supreme Court.”

The hearing opened with Democrats complaining that various documents had not already been made public by the committee’s Republican leaders. They were released by the committee minutes later.

Booker called the process used by the committee to decide which documents to make public “a bit of sham,” a characterization rejected by the panel’s Republican chairman, Chuck Grassley. Booker said he was willing to face possible punishment under Senate rules by releasing the documents himself, although Republicans said they had already agreed to release them.

(Reporting by Lawrence Hurley and Amanda Becker; Editing by Will Dunham and Peter Cooney)