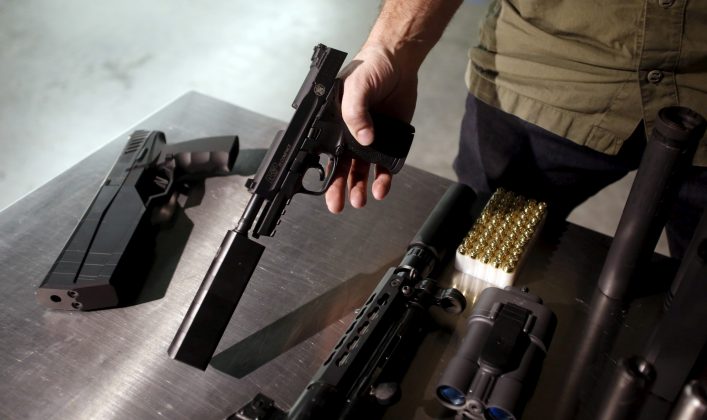 WASHINGTON (Reuters) – The U.S. Supreme Court on Monday turned away a bid to widen legal protections for gun silencers in a case involving two Kansas men convicted for failing to register the devices as required by federal law, as the justices again sidestepped a chance to rule on the scope of the right to bear arms.

The justices declined to hear appeals by the two men, Shane Cox and Jeremy Kettler, and left in place their convictions in cases brought by federal prosecutors. The men had asked the court to decide whether silencers – muzzle attachments that suppress the sound of a gunshot – are covered by the U.S. Constitution’s Second Amendment, which protects the right to keep and bear arms.

The court’s action came in the aftermath of a May 31 mass shooting in the Virginia coastal city of Virginia Beach in which a gunman who killed 12 people used weapons including a handgun equipped with a silencer.

President Donald Trump, a Republican with a close relationship to the National Rifle Association pro-gun lobby, said in an interview aired on June 5 that he does not like silencers and would be open to considering banning the devices. His administration this year imposed a ban on “bump stock” attachments that enable semi-automatic weapons to be fired rapidly, with the Supreme Court in March permitting the policy to take effect.

Kettler and Cox were prosecuted together in 2014 after Kettler purchased a silencer from Cox’s military surplus store in Chanute, Kansas. Both were prosecuted under a federal law called the National Firearms Act, which requires registration of certain firearms, with silencers included in a list of covered items along with grenades, machine guns and bombs.

The Denver-based 10th U.S. Circuit Court of Appeals upheld both men’s convictions last year, prompting them to appeal to the Supreme Court.

In January, the Supreme Court agreed to hear its biggest gun rights case since 2010, taking up a challenge to New York City’s strict limits on handgun owners transporting their firearms outside the home.

New York officials are considering revising the measure, which may lead to the Supreme Court case becoming moot before the justices hear arguments in their next term, which begins in October.

The court in recent years has been reluctant to take up gun cases and has yet to decide whether the Second Amendment protects a right to carry guns in public, a question left unanswered in its two most recent gun-related decisions.

The court currently has two appeals pending that ask for the justices to rule that the right to bear arms extends outside the home, as well as two other gun-related cases. The justices may be waiting for the New York case to be resolved before deciding what moves to take on the other cases.