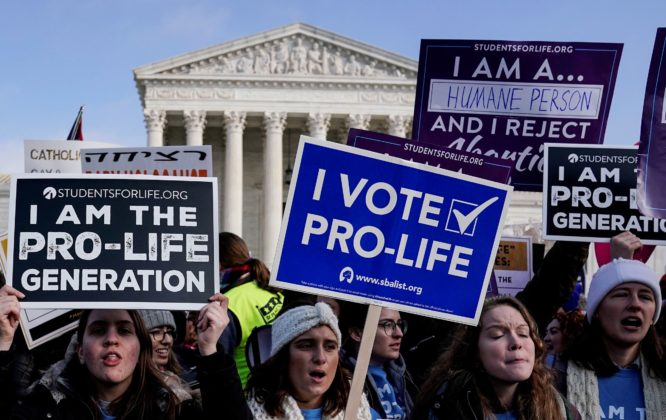 WASHINGTON (Reuters) – The U.S. Supreme Court on Friday agreed to take up a major abortion case that could lead to new curbs on access to the procedure as it considers the legality of a Republican-backed Louisiana law that imposes restrictions on abortion doctors.

The justices will hear an appeal by abortion provider Hope Medical Group for Women, which sued to try to block the law, of a lower court ruling upholding the measure. The Shreveport-based Hope Medical Group said implementation of the law would prompt the closure of two of the state’s three abortion clinics. The court will also hear a separate appeal by the state claiming that the abortion clinics do not have legal standing to sue.

The law includes a requirement that doctors who perform abortions have a difficult-to-obtain arrangement called “admitting privileges” at a hospital within 30 miles (48 km) of the abortion clinic.

The Supreme Court struck down a similar Texas requirement in 2016 when conservative Justice Anthony Kennedy joined the four liberal justices to defend abortion rights, but Kennedy retired in 2018 and Republican President Donald Trump replaced him with conservative Justice Brett Kavanaugh, with the court moving further to the right.

The case will test the willingness of the court, which has a 5-4 conservative majority that includes two Trump appointees, to uphold Republican-backed abortion restrictions being pursued in numerous conservative states. Anti-abortion activists are hoping the court will scale back or even overturn the 1973 Roe v. Wade ruling that legalized abortion nationwide.

The court will review a September 2018 ruling by the New Orleans-based 5th U.S. Circuit Court of Appeals that upheld the Louisiana law. The Supreme Court in February on a 5-4 vote prevented the law from going into effect while litigation over its legality continued.

A ruling in the Louisiana case is due by the end of June.

The law was passed in 2014 but courts have prevented it from taking effect.

Chief Justice John Roberts, one of the court’s five conservatives, joined the court’s four liberals in the majority when the court blocked the law from going into effect.

A federal district judge struck down Louisiana’s law in January 2016, saying it created an impermissible undue burden on a woman’s constitutional right to an abortion under existing Supreme Court precedent. The appeals court revived the law, saying there was no evidence any clinics in Louisiana would close as a result of the “admitting privileges” requirement.

The high court legalized abortion nationwide in 1973 and reaffirmed it in 1992 in a ruling that disallowed abortion laws that placed an “undue burden” on a woman’s ability to obtain an abortion.

“An undue burden exists, and therefore a provision of law is invalid if its purpose or effect is to place substantial obstacles in the path of a woman seeking an abortion before the fetus attains viability,” the court wrote in the 1992 ruling.

Since Kavanaugh joined the court last October, it has sent mixed signals on abortion. The court in June declined to hear a bid by Alabama to revive a Republican-enacted law that would have effectively banned abortions after 15 weeks of pregnancy.

In May, it refused to consider reinstating Indiana’s ban on abortions performed because of fetal disability or the sex or race of the fetus while upholding the state’s requirement that fetal remains be buried or cremated after an abortion.

Various conservative states in 2019 have enacted new laws that ban abortion at an early stage of pregnancy. None of those laws has taken effect.