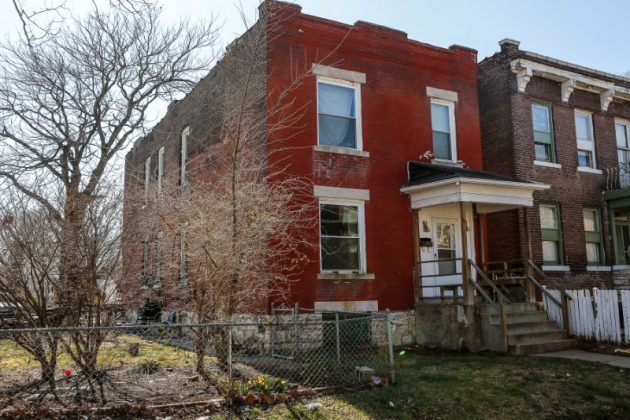 The residence of Juan M Thompson is seen after it was searched by police in connection with his arrest on charges of bomb threats made against Jewish organizations across the United States, in St. Louis, Missouri, U.S. March 3, 2017. REUTERS/Lawrence Bryant

By Brendan Pierson and Jonathan Allen

NEW YORK (Reuters) – A former journalist charged with making a wave of bomb threats to U.S. Jewish organizations by telephone while posing as his ex-girlfriend appeared in Manhattan federal court on Wednesday afternoon.

Juan Thompson, 31, was arrested in St. Louis earlier this month and arrived in New York on Wednesday morning. He appeared wearing beige prison garb and flanked by two public defenders at a brief hearing before Magistrate Judge James Francis.

The public defender assigned by Francis to represent Thompson, Mark Gombiner, did not seek bail at the hearing and declined to say afterward when he might. Thompson will remain in custody for now.

Prosecutors say Thompson used fake email accounts to impersonate his ex-girlfriend when he sent the bomb threats. The threats were the culmination of months of harassment against the ex-girlfriend that began after she broke up with him last July, they said.

Thompson was a reporter for the Intercept news website until he was fired last year for allegedly inventing sources and quotes.

Before his extradition to New York, he said he was being framed and targeted as a black man.

“Make no mistake: this is a modern-day lynching,” he said in a telephone interview from the Warren County jail in Missouri. “The allegations are false.”

Thompson said he had no anti-Semitic beliefs.

U.S. authorities have been investigating a surge of threats against Jewish organizations, including more than 100 bomb threats against community centers in dozens of states in separate waves since January.

The threats have stoked fears of a resurgence in anti-Semitism and forced the evacuation of many Jewish community centers, including some with daycare for young children.

The organizations Thompson threatened include a Jewish museum in New York and the Anti-Defamation League, according to a criminal complaint in Manhattan federal court. All occurred after the first flood of phone threats in early January.

Last week, an 18-year-old dual Israeli and U.S. citizen was arrested in Israel on suspicion of making dozens of hoax bomb threats to Jewish centers in the United States, Australia and New Zealand. His name was not disclosed.

His motives were not immediately clear. At a court hearing near Tel Aviv, the suspect’s defense lawyer, Galit Bash, said the young man had a growth in his head that causes behavioral problems.