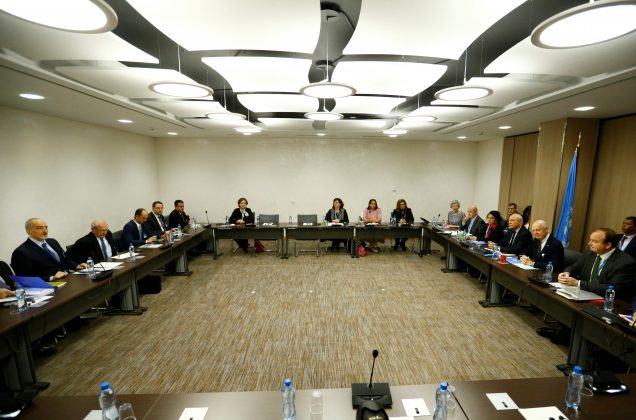 By Stephanie Nebehay and Lisa Barrington

GENEVA/BEIRUT (Reuters) – Syria’s government delegation quit U.N.-led peace talks in Geneva on Friday and said it would not return next week unless the opposition withdrew a statement demanding President Bashar al-Assad play no role in any interim post-war government.

“For us (this) round is over, as a government delegation. He as mediator can announce his own opinion,” government chief negotiator Bashar al-Ja’afari said after a morning of talks, referring to U.N. mediator Staffan de Mistura.

“As long as the other side sticks to the language of Riyadh 2 … there will be no progress,” Ja’afari said.

He was referring to a position adopted by Syrian opposition delegates at a meeting in Riyadh last week, in which they stuck to their demand that Assad be excluded from any transitional government.

Ja’afari went further in a televised interview with al-Mayadeen TV: “We cannot engage in serious discussion in Geneva while the Riyadh statement is not withdrawn.”

De Mistura put a brave face on the impasse, saying in a statement that he had asked the delegations to engage in “talks next week” and give their reactions to 12 political principles.

Previously there had been some speculation the opposition could soften its stance ahead of this week’s Geneva negotiations, in response to government advances on the battlefield.

The Syrian civil war, now in its seventh year, has killed hundreds of thousands of people and driven 11 million from their homes. So far all previous rounds of peace talks have failed to make progress, faltering over the opposition’s demand Assad leave power and his refusal to go.

Pressed whether the government delegation would return to Geneva next week, Ja’afari replied: “Damascus will decide.”

Ja’afari said the statement insisting Assad leave power that was adopted by the opposition in Riyadh ahead of this week’s peace talks was a “mine” on the road to Geneva, and the opposition had purposefully undermined the negotiations.

“The language with which the statement was drafted was seen by us, the Syrian government, as well as by too many capitals, as a step back rather than progress forward, because it imposed a kind of precondition,” he said.

“The language is provocative, irresponsible,” he said.

The opposition, which held brief talks later with U.N. officials, rejected the charge that it was seeking to undermine the talks, and said it sought a “political solution”.

“We have come to this round with no preconditions,” opposition spokesman Yahya al-Aridi told reporters.

“Now, not coming back is a precondition in itself. It’s an expression or a reflection of a responsibility toward people who have been suffering for seven years now,” Aridi said.

“We call on the international community to put pressure on the regime to engage with this process,” Hariri said in a statement.

De Mistura said on Thursday the talks would run until Dec. 15, but the government delegation might return to Damascus to “refresh and consult” before a resumption probably on Tuesday.